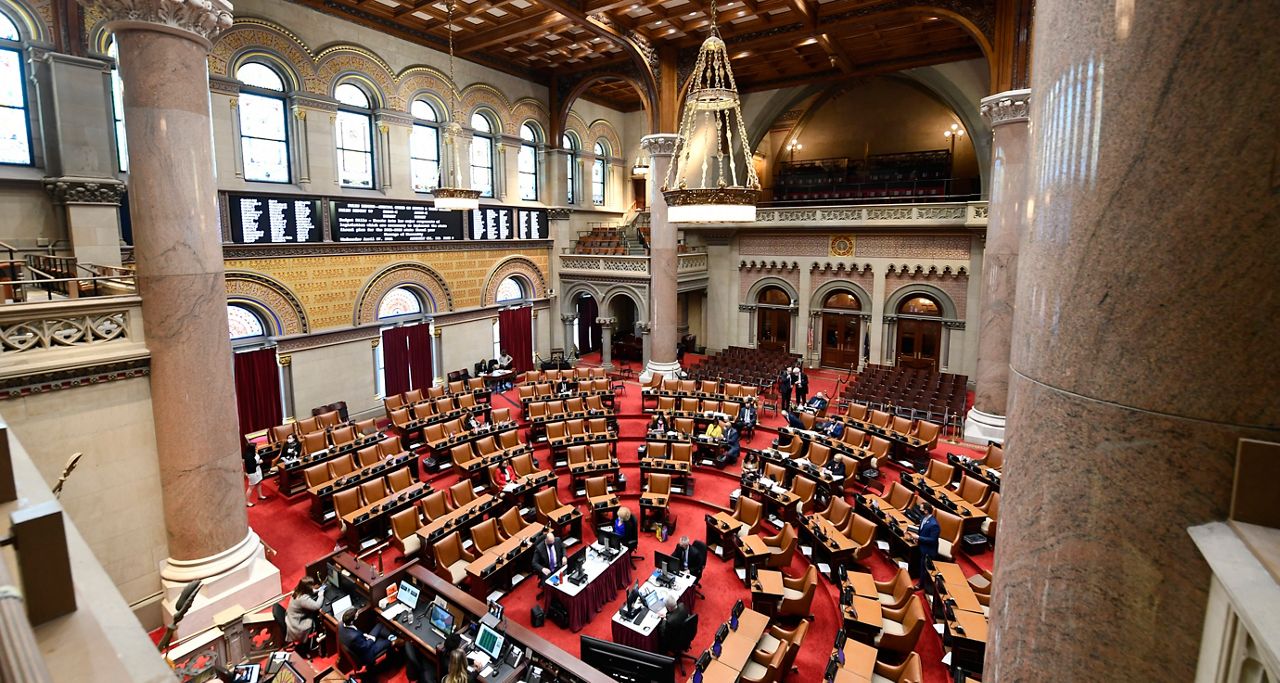 Consume this news while seated: New York's state budget may be a late one.

The April 1 deadline is essentially a meaningless one for nearly all 20 million New Yorkers, even as lawmakers and Gov. Kathy Hochul wrestle with consequential proposals over how to fund child care, whether New York's criminal justice system needs to undergo further changes and how at minimum $216 billion in taxpayer money should be spent.

But disagreements and protests abounded at the state Capitol building on Tuesday. Any sign of deals were scarce as lawmakers seemingly joked they didn't bring enough clothes to last them through the weekend of remaining in Albany.

Hochul has said she wants to reduce the temperature over the heated budget process in a Capitol slowly re-awakening from pandemic emptiness.

Advocates and lawmakers were pushing on Tuesday to include child care funding for undocumented immigrants as officials circle around boosting spending by $3 billion.

"Undocumented people must be included," said state Sen. Jabari Brisport, a key lawmaker in the child care push. "We don't check your citizenship when you enroll your kid at a public school, we should not do it for child care."

Sources say up to $3 Billion expected to be included in New York State Budget for Childcare@GovKathyHochul wants to make it available to those at 300% of poverty level, or families making $120,000 and below. Would also raise pay for providers. Goal is to get it running this year

Lawmakers also remain at odds over how to change New York's cash bail law. Hochul wants more circumstances for when bail is considered. Republicans like Senate Minority Leader Robert Ortt have called for judges to be able to determine whether a defendant is too dangerous to be released — considered a non-starter for Democrats.

"Our colleagues in the (Democratic) majority have no ideas, they've put forward no solutions," Ortt said. "We're just trying to scare people — as if murder rates are just a statistic used to scare people. That's a real statistic."

But there are expectations changes will be made to the bail law after Hochul proposed a 10-point public safety plan. A final deal could include a range of public safety and criminal justice law changes, from allowing people in prison to access tuition aid to sealing criminal records once a sentence and parole are finalized.

"There are certain electeds who are trying to inflame public opinion by saying that public safety is in jeopardy," said Democratic Assemblyman Phil Steck. "All laws can be improved, this law can be improved. But the basic concept has not jeopardized public safety."

An expansion of Kendra's Law, a measure that requires people in a mental health crisis to receive treatment, also remains controversial. But Democrats expect the measure will at least be extended, potentially in the budget.

"It's long been pushed to the side and right now it has to be up front," she said. "We're talking about children and COVID and all sorts of things. I'm from the Bronx, put your money where your mouth is."

Multiple proposals are still alive, meanwhile, in the debate over relief from high gas prices, including a rebate program or a suspending of state gas taxes for the rest of the year.

"I don't know which one is better or worse, but what's important is we put money in peoples' pockets," said Democratic state Sen. James Skoufis.

Protesters returned to the Capitol after the building was largely closed to the public for much of the COVID-19 pandemic. Among the activists arrested on Tuesday was candidate for lieutenant governor Ana María Archila, who has called for more assistance for tenants and opposes bail law changes.

Hochul, Archila said moments before was arrested, "is showing that her priorities are real estate and not real peple and that's why we're disrupting business as usual."