President Donald Trump on Tuesday knocked Gov. Andrew Cuomo amid a push from New York officials to gain access to tens of thousands of ventilators.

Trump pointed to an article from Gateway Pundit, a right-wing website. He made two basic claims:

Let’s take one claim at a time, since they’re both exaggerations, if not outright falsehoods.

The source of this traces back to a 2015 task force that assessed the state’s ventilator allocation guidelines if the state faced an influenza outbreak similar to the 1918 Spanish flu.

The task force’s report was an update from a package of 2007 recommendations following the 2011 H1N1 influenza epidemic. The document itself addresses ventilator shortages in New York and how the equipment would be used in the event of a shortage.

Trump’s assertion that Cuomo “refused to order 15,000 ventilators” doesn’t appear in the report. 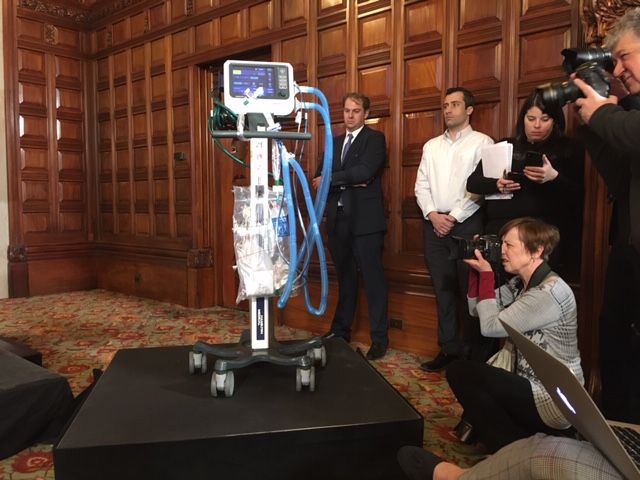 Gov. Andrew Cuomo had a ventilator brought into the Red Room during a press conference earlier this month. (Nick Reisman/Spectrum News)

What the report concludes, however, is an epidemic on the scale of the 1918 flu outbreak would stretch not just equipment thin, but also test the limits of health care personnel.

“The State’s current approach to stockpiling a limited number of ventilators balances the need to prepare for a potential pandemic against the need to maintain adequate funding for current and ongoing health care expenses,” the report found. “Furthermore, severe staffing shortages are anticipated, and purchasing additional ventilators beyond a threshold will not save additional lives, because there will not be a sufficient number of trained staff to operate them.”

“In the event of an overwhelming burden on the health care system, New York will not have sufficient ventilators to meet critical care needs despite its emergency stockpile. If the most severe forecast becomes a reality, New York State and the rest of the country will need to allocate ventilators and other scarce resources.”

In other words, all the ventilators in the world wouldn’t help if you didn’t have the people.

State health officials have been recruiting retired licensed health care workers to meet the expected demand in the coming weeks.

But what about the “death panel” claim? That’s terminology that was popularized by Republican former Lt. Gov. Betsy McCaughey Ross.

The report does discuss the use of “triage committees” that could be used to determine ventilator allocation. The age of the patient would be used as a “tiebreaker.”

The triage committee would not be established by state officials, but by hospitals, and the report makes clear it’s optional.

Still, the overarching question remains: How closely are Cuomo and his health advisors following the report?

Cuomo on Wednesday vowed there would be no prioritization for ventilator allocation. The state is exploring ways of splitting ventilators among patients.

And the report itself was based on the 1918 flu pandemic, not an outbreak like we are seeing now.

“Nobody in the world bought ventilators for the 1918 Spanish flu pandemic,” Cuomo said.