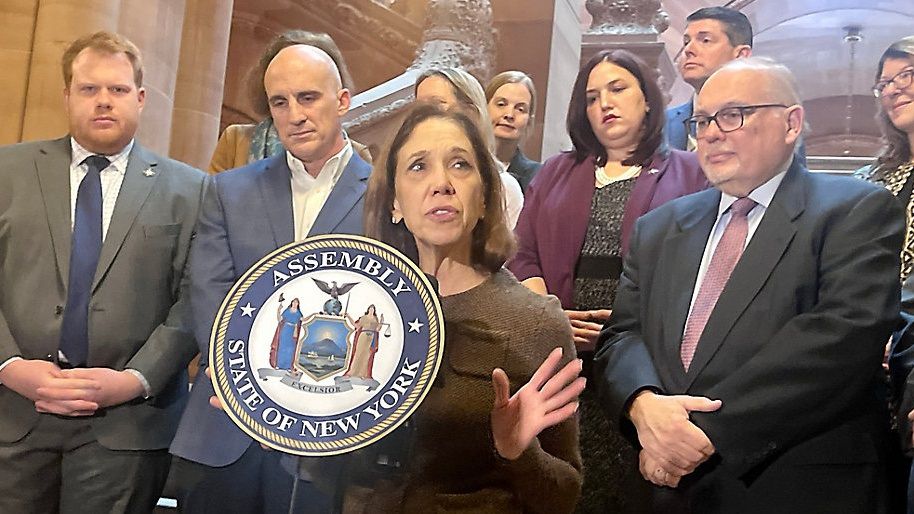 Assemblywoman Amy Paulin, the chamber's new Health Committee chair, says at a rally in the state Capitol on Tuesday one of her top priorities in the next budget will be a 20% increase to state Medicaid reimbursements to long-term care facilities. (Kate Lisa for Spectrum News 1)

New York nursing homes are facing deepening financial and staffing crises, pushing them to the brink of collapse.

That's mobilized a bipartisan group of lawmakers and long-term care facility owners who rallied in the state Capitol on Tuesday, pleading with Gov. Kathy Hochul to increase the state's Medicaid reimbursement rates for adult care by 20% in her executive budget.

"The problem of underfunding our nursing homes is materializing in closing beds, in reduced admissions and patients who are ready to be discharged being backed up in the hospital," said Assemblywoman Carrie Woerner, a Democrat from Round Lake.

A bipartisan group of assemblymembers are pushing for 20% ⬆️ in Medicaid reimbursement rates to nursing homes in @GovKathyHochul’s budget.

About 70% of NY nursing home residents depend on Medicaid.

New York was the only U.S. state to cut Medicaid reimbursements during the COVID-19 pandemic. Former Gov. Andrew Cuomo slashed those reimbursements 1.5% in 2020 in the pandemic's earliest days while many other states implemented double-digit increases to their programs.

Mark Koblenz, CEO of the Daughters of Sarah Community for Seniors in Albany, says the state Health Department's elimination of that cut, and an additional 1% percent increase in last year's budget, didn't make up for the previous loss, or help the ongoing staffing shortage.

"Since we've come out of COVID, we still have upwards of 20, sometimes even 30, open beds, which we cannot fill even though there are people out there that need our services or need our care, [or] want to come in and have our care," Koblenz said.

The state has not rebased, or officially recalculated, its Medicaid rates for patient care for 15 years, with inflation rising more than 40% since.

"New York State increased Medicaid reimbursement rates throughout the pandemic," according to a statement from the state Health Department on Tuesday, reiterating the reversal of the 2020 cuts in the last budget and additional 1% increase.

"The New York State Department of Health also reviews nursing homes' rates twice a year based on their submitted population assessments to provide additional funding to nursing homes based on the health and service intensity necessary for the population they serve in their facilities," according to the department. "This review process results in significant additional Medicaid funding each year."

DOH updates its nursing home capital funding annually, which typically results in an overall increase in Medicaid funding, according to the department.

However, administrators in multiple adult-care facilities say they have an average staffing vacancy of 26%, adding they've had to close units for the first time.

"We lack the staff to provide the level of care we expect and we know families expect and that we want to provide," Koblenz said.

Assemblywoman Amy Paulin, the new Health Committee chair, said at Tuesday's rally the 20% increase for Medicaid reimbursements is one of her top priorities going into budget negotiations.

But lawmakers continue to wait on Hochul's budget proposal before discussing the issue with legislative leaders and their members. Hochul will deliver her budget presentation in the Capitol at noon Feb. 1.

Hochul says her administration is working on ways to correct the health care staffing crisis, but gave few specifics at a public safety event in Albany on Tuesday.

"We're acknowledging the problem is real," Hochul said. "What we put in place is a way to figure out a way to get more in the system. It's not going to solve it overnight — it's not going to solve it overnight. But this has got our full attention to find out ways we can get more people, retirees, people from other states, just bring back more health care workers so those wait times evaporate. But we're just not there yet."

The financial and staffing crises come as the state has imposed an unfunded mandate on long-term care in 2021, requiring hospitals and adult-care facilities to set staffing ratios for patients, or pay daily penalties from the state Health Department if they aren't met.

The mandate has forced potential long-term care patients to stay in hospitals, driving up emergency room wait times across the state.

Hochul delayed implementation of the law, but it went into effect this year.

Assemblyman Josh Jensen says the law has to be changed and adds to facilities' financial challenges.

"Let's put the law on hold," said Jensen, a Republican from Greece. "Let's figure out our nursing care needs and make sure we get the staff available and the funding available to fulfill the obligation that we built in."

Multiple adult-care facility owners and caregivers in the Capitol on Tuesday agreed the law should be scaled back.

But several Democratic lawmakers who supported the 2021 legislation argue the mandate will not be an issue for facilities if they're properly reimbursed.

"We made changes based on what we had seen around nursing homes," Senate Majority Leader Andrea Stewart-Cousins said Tuesday at an unrelated press conference. "...We're never a one-and-done conference. We make decisions based on the facts, the data, and if we have to tweak things, we do, but obviously the staffing issue has been an issue not only for nursing homes, and so, we did what was appropriate at that time."

Several long-term care leaders say the Health Department has not contacted their facilities about their staffing issue to date.

"The governor has been trying to hold off the penalties and we appreciate that, but I'm sure the department will be working hard on that issue this year," said Brian Nealon, CEO of the Wesley Community in Saratoga Springs.

The minimum staffing and resident care spending standards for nursing homes took effect Dec. 7, but the department has not taken enforcement action to date, according to DOH. Facilities are required to spend 70% of their revenue on direct resident care and 40% on staff who directly care for residents, deducting 15% of staffing costs contracted out by a facility for nursing services.

"...but the department will begin monitoring compliance as well as evaluating the broader impact on the industry," according to a statement from the department Tuesday. "The department is working to develop policies and procedures to put the regulations adopted last month into effect and will then issue guidance to the nursing home operators. Mitigating factors can be considered by the Department when assessing penalties for noncompliance at a later date."

Jensen and Assembly Republicans led an effort last fall inquiring about the state's funded Reimagining Long-Term Care Task Force, which has not met since it took effect Oct. 27.

The state Health Department and Office for the Aging continue to wait on state leaders who have not finalized or name each of the members for appointment.

"Once those appointments are finalized, we will be able to provide an update on the task force’s next steps," according to DOH.

Lawmakers who inquired about the task force's delay have not received a response.

In her State of the State address Jan. 10, Hochul proposed investing in care teams to provide care for low-income adults in their home, assist family caregivers and improve reporting from nursing homes and assisted living facilities.

"Gov. Hochul is committed to ensuring that all New Yorkers can age with dignity and independence in the community of their choosing," governor's spokesman Justin Mason said Tuesday. "The proposals announced during her State of the State address outline bold investments in aging services and quality long-term care that will ensure communities throughout the state are both healthy and livable for all New Yorkers.”