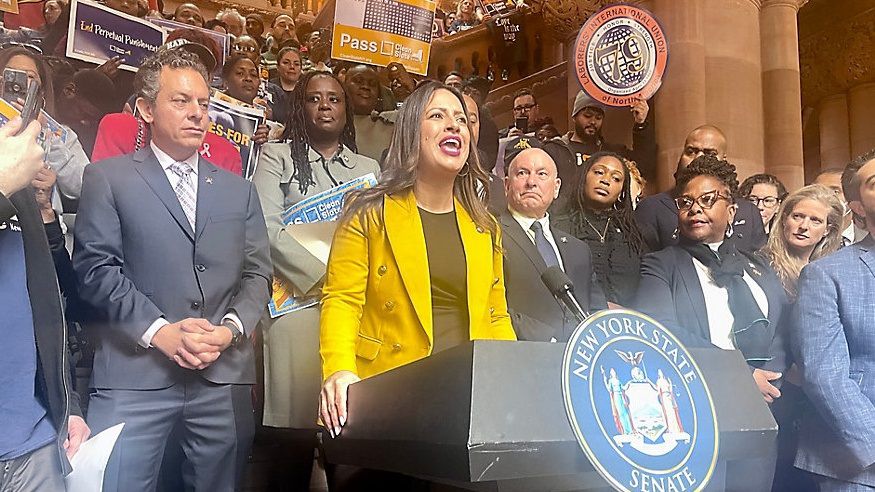 Sponsor Assemblywoman Catalina Cruz gives an impassioned speech at a rally in the state Capitol on Tuesday for the Legislature to pass the Clean Slate Act this session. (Spectrum News 1)

Lawmakers are expected to reintroduce a new version of the Clean Slate Act next week that would allow law enforcement, judges and the state Education Department to have access to a person's sealed criminal records.

The Clean Slate Act would seal New Yorkers' criminal records three years after sentencing for misdemeanors and after seven years for felonies. It does not apply to sex crimes.

Lawmakers are breathing new life into a fight this session for legislation that would seal the criminal records of roughly 2.3 million New Yorkers.

Ismael Diaz Jr., a leader with Center for Community Alternatives, is one of the people who would have his past criminal records sealed if the Clean Slate Act becomes law.

Diaz spent nearly a decade in prison on felony charges, and recounted at a rally in the state Capitol how he's been denied employment for six years after completing his sentence, including for a janitorial position.

His punishment is supposed to be over, but he says it's turned into a life sentence.

"We have a lifetime of rejection, termination from housing and employment," Diaz added in front of the Million Dollar Staircase. "Thus, it becomes impossible to make a living and care for our families."

Senators passed Clean Slate last year, but the measure died in the Assembly after concerns over transparency and public safety during a significant election year.

Lawmakers are working to appeal to moderates, unveiling a new billboard in favor of Clean Slate on Interstate 787 this week near the exit to the Capitol.

Sponsor Assemblywoman Catalina Cruz says changes made in a fourth version of the bill will allow law enforcement, judges and the state Education Department to access a person's sealed records as part of investigations, licenses for sensitive professions or criminal sentencing.

"If you're concerned with public safety, the way to keep the community safe is to get people back to work," said Cruz, a Democrat from Queens. "Statistics show recidivism is completely tied to someone's ability to sustain their family to actually earn a living."

“We want to talk about how people shouldn’t rely on resources from the govt, but the govt doesn’t want to let them work.

“As a survivor of crime, I would like people to have a second chance and a home and a job.” pic.twitter.com/5RMXsvkIoF

Cruz says her colleagues who have had reservations about the bill in the past are satisfied with the changes to be reflected in the latest version to be reintroduced later this month.

Republicans have stood against Clean Slate from the beginning, saying sealing New Yorkers' criminal records will erode community safety after a recent uptick in violent crimes in the last several years.

Public safety continues to be a top concern for voters in the state.

Assembly Minority Leader Will Barclay says the changes in the newest version of the bill won't address his conference's concerns, and they'll continue to push back against the measure.

"I think we all believe that in life, you should have second chances, but that doesn't mean carte blanche or you erase the total history of the person," said Barclay, a Republican from Pulaski. "...Ultimately, people have histories and if it's something that affects their job and the safety of their communities, I think there is a right to know by that community and to wipe that slate out, I think, can create danger."

Keeping formerly incarcerated people out of the workforce and housing is a drain on the economy and leads to a loss of $78 billion and $87 billion in national revenue each year, said Business Council of New York State Executive Vice President Paul Zuber, citing a U.S. Chamber of Commerce study.

"Why are we keeping people out of the economy?" Zuber said. "It doesn't make sense."

Of 10 million open jobs nationwide, there's about six million people in the U.S. to fill them, according to U.S. Bureau of Labor statistics. About 500,000 jobs remain open in New York.

But Democrats, who kept their supermajority in both houses, expect greater support from new elected officials in both chambers and for Clean Slate to pass the full Legislature this session.

Representatives with Assembly Speaker Carl Heastie's office said they'll be discussing the issue with their colleagues in the Assembly majority, but haven't yet. Similarly, Democrats in the Senate majority have yet to conference on the changes made in this fourth version of the Clean Slate Act, but senators voted to pass it last session and likely will again.

"Our public safety conversation is similar," said Myrie, a Brooklyn Democrat. "Is it politically tough for some people? Of course, it is. But is it the right thing to do? Yes. And that is what I'm going to continue to ask my leaders, my colleagues, to support."