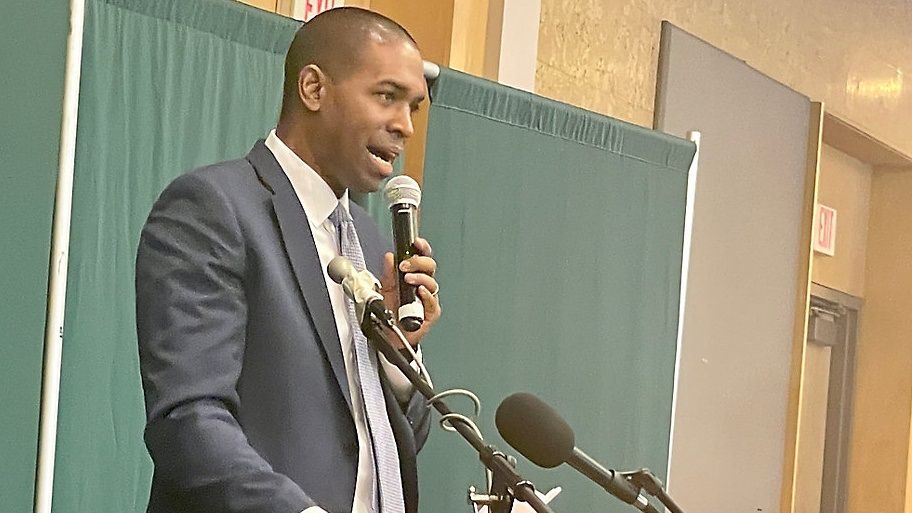 Lt. Gov. Antonio Delgado speaks to middle and high schoolers at Siena College on Friday about combatting hatred and promoting peace in the spirit of Dr. Martin Luther King Jr. through music and art. (Spectrum News 1)

Lt. Gov. Antonio Delgado joined 100 middle and high schoolers in the Capital Region on Friday to share messages of peace and unity ahead of Martin Luther King Jr. Day.

Delgado said educating youth and others who may not be exposed to people different from them is critical in combatting hatred and related violence as hate, antisemitism and deep divisiveness have become more prominent over the last decade.

“Listen to that song inside you — we all have that song," Delgado told students during his remarks. "That’s what connects us. That’s what binds us. Believe in your power, believe in the love inside each and every one of you.”

The students wrote poetry, stories and songs about fighting inequality as part of the Students Together Opposing Prejudice conference. The event, featuring students from 11 upstate school districts, took place at Siena College in Latham ahead of Monday's holiday and focused on the music that inspired civil rights.

Before the LG speaks, students are sharing their work about things they say people don’t talk about — mental health, & how jealousy, comparisons and feelings of being unwanted come to the forefront at a young age.

This @DoaneStuart student shares her experience in her poetry. pic.twitter.com/AlsTOORlhq

Delgado remarked about the need for more love in the world, and reflected on the six years he spent as a broke hip hop artist in Los Angeles.

Delgado serves as the head of the Hate and Bias Prevention Unit in the state Human Rights Division that Gov. Hochul announced last month. The new statewide campaign is focused on improving public education and outreach to help detect and prevent this kind of bias in communities.

@DelgadoforNY reflects to students his past in hip hop was “To be seen, to be heard, to be understood.

“…There’s no doubt it defines what’s culturally relevant, not just here but around the world, and it started from communities who are overlooked.” pic.twitter.com/iWP013ZDDa

Scott Richman, ADL's regional director for New York and New Jersey, says King's message is more critical than ever with all forms of hate on the rise.

"The purpose of reaching out to young people is to create that kind of society where people respect one other, where they celebrate difference and celebrate diversity rather than looking down on it," he said.

The most frequently reported bias motivations for hate crimes against property in New York in 2021 were 58% anti-Jewish and 20.2% anti-Black, consistent with prior years, according to DCJS.​

Morgan Castelli, a 16-year-old junior at Mohonasen High School, reflected on how she witnessed her friends of different races, genders and sexual orientations face different hardships while growing up.

She encouraged her peers to continue talking about how hate affects people differently, and things that make them uncomfortable more often than Martin Luther King Jr. Day.

King is a personal hero of Delgado's from childhood. The lieutenant governor said the famed minister and civil rights leader continues to inspire him to promote peace while shining a light on communities often underlooked, undervalued and unseen.

"It's really about celebrating not only love but his commitment in his power — the power of his belief," Delgado said. "I think when we truly step back and reflect — truly reflect on the power of love and what it can do and how it lives in all of us, I think we'll all be better for it."