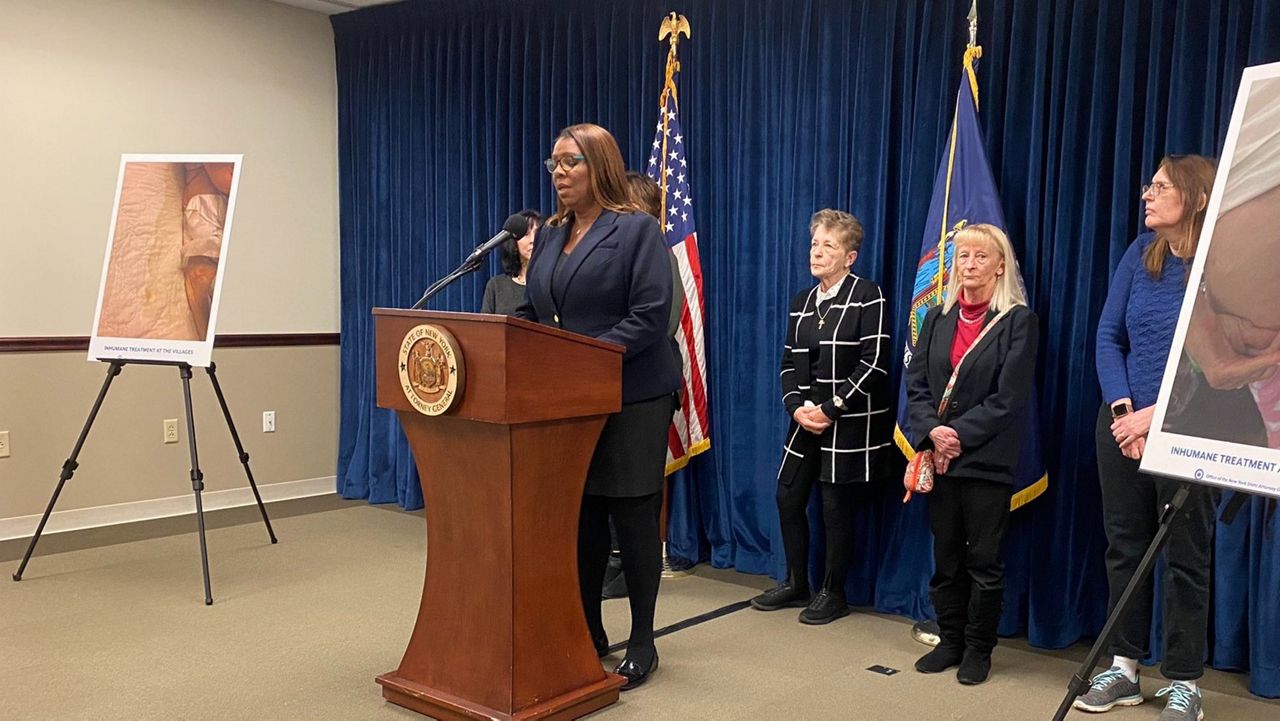 Editor's Note: The images in this story may be disturbing to some viewers.

ALBION, N.Y. — Family members of patients and former patients at The Villages of Orleans Health and Rehabilitation Center detailed some of their alleged experiences with the Albion facility.

"My husband was laying on a bed with no sheets. No blankets. No clothing. He had on a diaper and that's how he laid in 14-degree weather," Margaret Volkmar relayed what she saw on a video chat during the COVID-19 pandemic after she said staff claimed her husband had been sleeping for hours.

Vicki Juckett said her family member had an avoidable sprained ankle the day after she was admitted and also suffered from "massive skin injuries and rashes and bedsores." Darlene Stevens said her brother who had a mental disability lost a severe amount of weight under care at the facility and stopped speaking.

When she was finally able to see him, she described a disturbing scenario.

"He came with no glasses, a red mark, torn-off hospital-issued-type pants that had been ripped off, no shoes and an absolutely filthy shirt from food that had dribbled down," she said.

New York State Attorney General Letitia James said these are just a small piece of the neglect and inhumane treatment residents of the nursing home received, in some case leading to deaths, as the owners prioritized profit over staffing and patient care.

"The owners and operators of The Villages orchestrated an elaborate medicaid fraud scheme pocketing more than $18.6 million from The Villages since 2015," James said.

The attorney general's office filed a lawsuit Monday detailing the alleged scam in which it said respondents David Gast, Sam Halper and Ephram Lahasky hid their roles as owners of the facility. Another man, Bernard Fuchs, is named in documents as the sole owner but is said to have a limited role.

According to the AG the already bad conditions worsened during the pandemic with management trying to hide positive cases, delaying or neglecting quarantine protocols and did not report positive cases “resulting in unnecessary and preventable deaths.”

The owners, which included those men and others, the suit claims, diverted about 20% of the operating budget between 2015 and 2021 to themselves and family members through LLCs they had created to collect inflated rent payments and "administrative assistance" payments.

She said the situation only grew worse at the heights of the pandemic. The attorney general said ownership told staff to report to work when they were sick, supplied little to no PPE, failed to implement infection or isolation protocols and did not report positive COVID-19 cases, likely leading to more unneccessary deaths.

"Because of the owners' decision to cut staffing expenses, The Villages' staff, already stretched thin, were forced to work even longer hours and let me remind you, some of them worked while they had COVID," James said.

The lawsuit calls for immediate injunctive relief, including forcing owners to return all fraudulently-received funds, removing several respondents from management positions, appointing outside financial and health care monitors and suspending the admittance of any new patients. James said there is an ongoing investigation and would not comment on any potential criminal charges.

She said there are ongoing investigations in her office regarding other nursing homes as well and did note some of the alleged owners of The Villages have stakes in other facilities in New York and around the country. Patients' families are also currently in the middle of a class action suit against the nursing home.

Spectrum News 1 has reached out to the facility but was unable to connect with anybody.