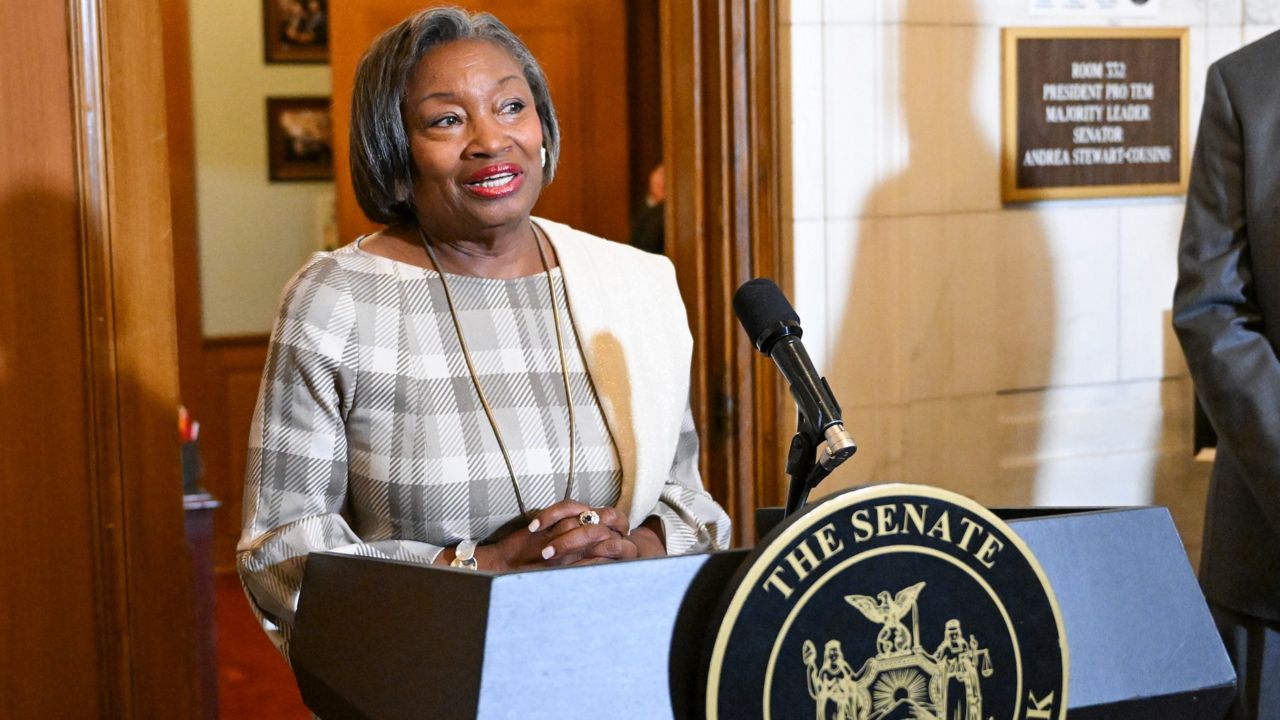 “I love the fact that we were the biggest majority, the only supermajority in history, and should we not have 43, 42 again, we’ll still be the second largest, so it’s fine,” she told Capital Tonight Tuesday.

New York’s Senate Democrats need to keep 42 out of 63 seats in order to maintain their veto-proof majority. Thus far, they have done well relative to the state’s congressional delegation — only losing three incumbents in what was expected to be a red wave — Sens. Anna Kaplan and John Brooks, from Long Island, and Elijah Reichlin-Melnick in the Hudson Valley.

Stewart-Cousins blamed some of the losses on GOP gubernatorial candidate Lee Zeldin’s popularity.

“You had the top of the Republican ticket from out on the island, and so that would be a huge base for him,” Stewart-Cousins said, referring to Zeldin. “I think that Sen. Reichlin-Melnick is an amazing, amazing public servant, just as Anna Kaplan and John Brooks, and it was very, very close,” Stewart-Cousins said.

Reichlin-Melnick, from Rockland County, wasn’t able to fend off a challenge from Republican Bill Weber.

In a Twitter string released on Monday, Reichlin-Melnick said Gov. Kathy Hochul’s campaign was “absent” from his home county, and that no high-profile surrogates came to his district to get out the vote.

When asked about his grievances, Stewart-Cousins said she hoped no area of the state was untouched by campaigning, but acknowledged a delay.

“I believe the rallying…it could have begun earlier. But I think all of these things, all of us, are going to be looking at the results, where we could have done more, and where we might have been able to modulate a little bit better,” she said.

The Senate Democrats did pick up a seat in the Southern Tier with Lea Webb’s victory over former Binghamton Mayor Rich David in the new 52nd Senate District, including Broome, Tompkins and Cortland counties.

The final tally of wins and losses for the Senate Democrats may not be known for several days.

There are still three races to be called: District 17 in southern Brooklyn between Democrat Iwen Chu and Republican Vito LaBella; District 42 in Orange County between incumbent Democrat James Skoufis and challenger Dorey Houle; and District 50 outside of Syracuse, where Democrat John Mannion is trailing Republican challenger Rebecca Shiroff.

The fact that there have been no fewer than three lawsuits filed in connection with two of these districts isn’t helping matters.

In the 42nd, Republican Dorey Houle, who is trailing incumbent James Skoufis by over 1,000 votes, has alleged that the Orange County Board of Elections allowed defective voting machines to be used.

In the 50th outside of Syracuse, Republican Rebecca Shiroff, who has pulled slightly ahead of incumbent John Mannion, has alleged defective voting machines and other irregularities. Meanwhile, Democrat Mannion has also sued to seek a recount.  Regardless, if the margin of votes separating the two candidates is less than 0.5%, a full manual recount will be conducted by law.

“Even with redistricting, the reality is that my conference has always been people who are boots on the ground, so it wasn’t like we weren’t doing the work within our community all the time,” Stewart-Cousins explained.

Stewart-Cousins also told Capital Tonight that the Democratic conference will continue to discuss criminal justice reforms, but that she doesn’t see a need for a special session on criminal justice issues or anything else, including an extension of the gas tax holiday.

“At this point, we are not talking about a special session. It’s hard to know what will happen between now and the end of December,” she said. “Obviously, we were very, very conscious of the impact that these gas prices had on peoples’ pockets. I never say never, but at this point… there is nothing on the books right now.”