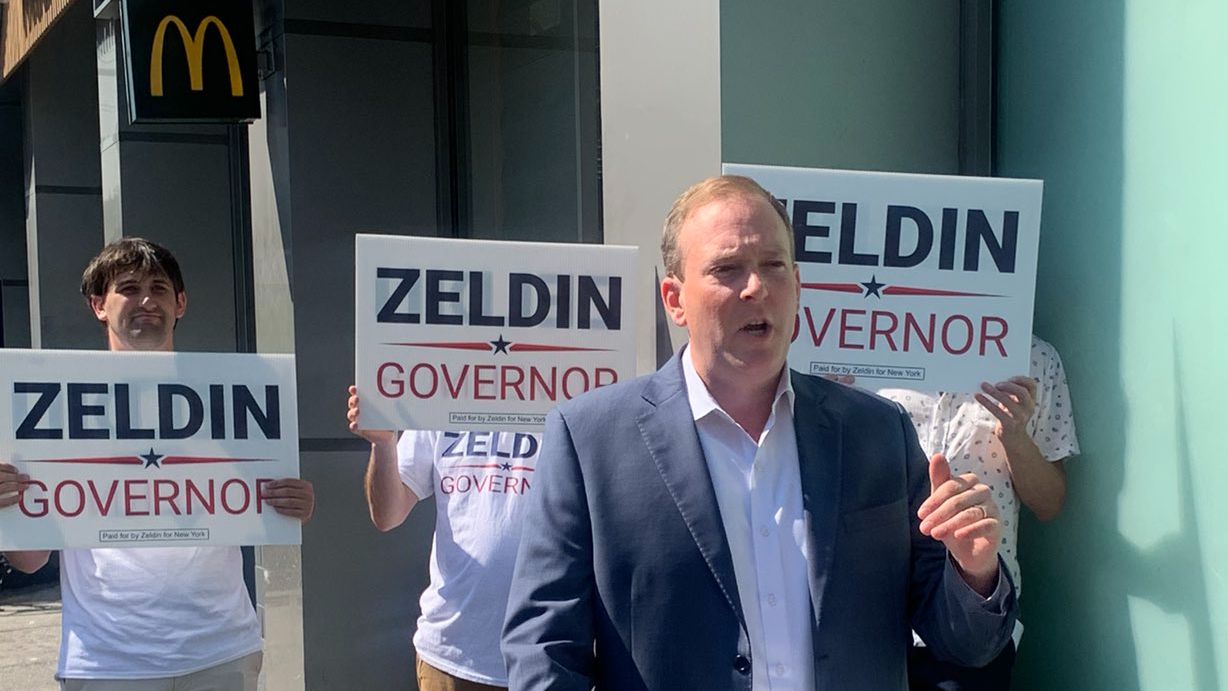 Republican candidate for governor, Rep. Lee Zeldin, speaks during a press conference outside a McDonald’s in Manhattan. (NY1/Zack Fink)

He was responding to a video that surfaced this weekend showing a man waving a hatchet at people at a McDonald's in the Lower East Side.

After getting into what appears to be fight with some local patrons, cell phone video captured this man going into his bag and pulling out a hatchet.

“You have somebody who reaches into their backpack, pulls out a hatchet and starts hacking up tables and walls. Swinging the ax at customers who are here,” Zeldin said at a press conference outside the Delaney Street McDonald’s where the incident took place.

.@leezeldin on Lower East Side in front of McDonald’s where a hatchet wielding man went on a rampage. Says it’s part of a pattern of rising crime rates and people not being held on bail. Video ⬇️https://t.co/2VuVDoNzI2 pic.twitter.com/FHLSo7Q3As

Police arrested Michael Palacios a short time later and charged him with two misdemeanors that are not bail eligible. So, instead of being held in jail, Palacios was released.

But according to Zeldin, judges should have a “dangerousness standard” to keep people locked up. And he said that’s a failure in Albany, where lawmakers passed bail reform without that standard.

“I believe that even if you look at the offenses that were charged, the judge should have discretion. In this particular case, you have the facts before the judge,” Zeldin said.

Asked about the video, Gov. Kathy Hochul indicated she has reached out to Bragg to find out why Palacios was only charged with non-bail eligible misdemeanors.

“The images are disturbing, absolutely,” Hochul said. “We are actually asking what the thought process was in the decisions that were just made because we have a question about it. Because they have discretion to charge in a different way that would make them bail eligible.”