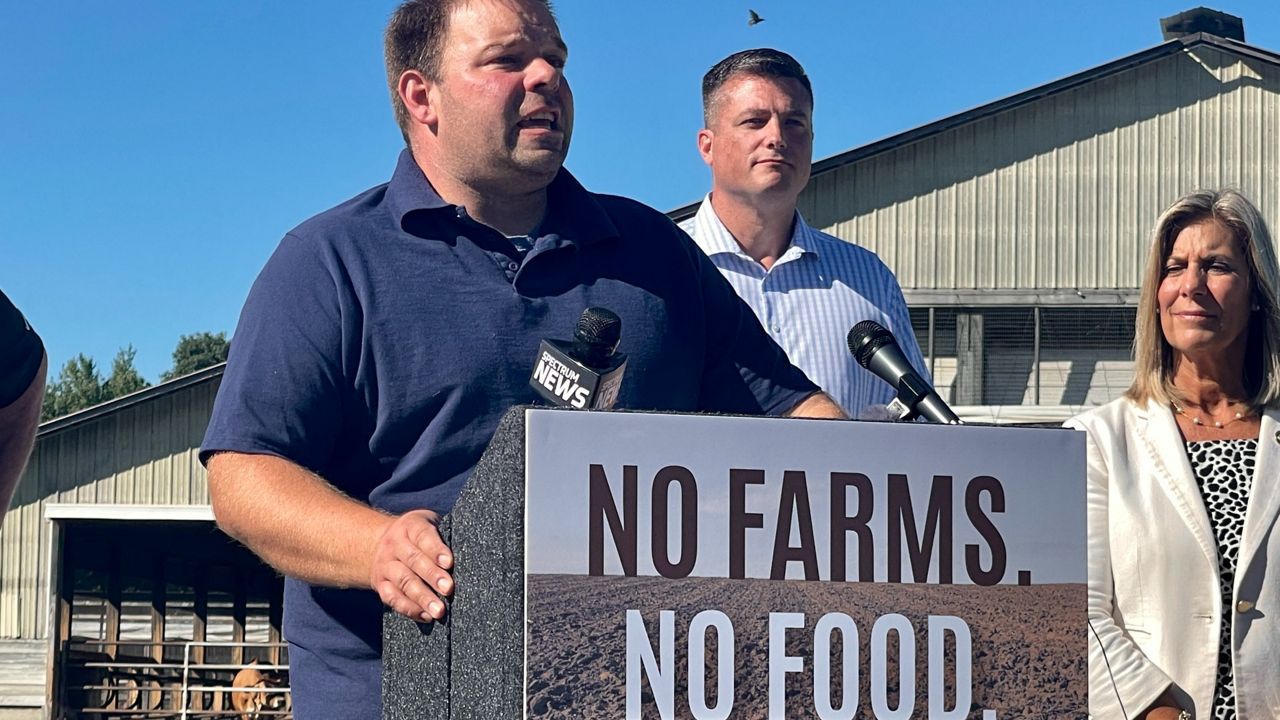 Farmers and upstate New York lawmakers are pounding the drum in a final effort to urge the state Labor Department commissioner to reject a proposal to reduce the overtime threshold for farm workers to 40 hours.

The Farm Wage Board will vote in a virtual meeting at 4:30 p.m. Tuesday and submit its final report to Labor Department Commissioner Roberta Reardon, expected to recommend reducing the overtime threshold over the next decade.

Lawmakers gathered at Dutch Hollow Farm, a dairy farm in Schodack Landing​, on Thursday urging the board, Reardon and Gov. Kathy Hochul to reject the reduction. A subsequent rally is scheduled for Friday in Niagara County.

"Our employees chose this job because they knew what they had in store for them," said Nate Chittenden, a co-owner of Dutch Hollow Farm.

Farmers from across the state say the proposed reduction will steeply increase labor costs, and on top of inflated costs of feed, fuel and other necessities, will bankrupt small family farms across New York.

"We don't get to dictate to anybody how much money we're going to make on the product," Chittenden said. "We don't get to change our profit model to make to accommodate for higher labor."

Advocates for equal pay for farm workers were at the New York State Fair in Syracuse on Thursday urging people to sign their petition in favor of reducing the overtime threshold to 40 hours. They say the planned 10-year phase-in is too long for workers to get paid for a 40-hour overtime threshold like other industries.

"If there are problems that need to be fixed in the agricultural industry, which there are many, it can't be done on the backs of cheap labor and exploited labor," said Jessica Maxwell, executive director of Workers Center of Central New York.

Through Maxwell's interpreting, Hernandez said farm work is dangerous, and its employees should be paid an equal wage to encourage more workers in the industry that puts food on everyone's tables.

Tuesday's meeting is expected to be brief and straightforward.

"The moderator will introduce the meeting," according to a statement from the Labor Department on Thursday. "Board Chair Brenda McDuffie will then make a brief statement, and make a motion and call for a second to adopt the report and deliver it to Commissioner Reardon. After the vote, the other two board members will have an opportunity to comment. The meeting will then be adjourned."

Labor Commissioner Reardon will have 45 days after Tuesday's vote to review the report and recommendations and announce her decision. It's unclear if the department can request an extension.

The Labor Department will publish a notice of receipt of the report in at least 10 general-circulation newspapers across the state. People can submit objections or recommendations to the commissioner within 15 days after that publication.

The department will start a process to make specific rules about the reduction if the recommendations are adopted, during which there will be a two-month public comment period.

The Legislature voted in 2019 to reduce the threshold to 60 hours down from 80. The push against lowering the overtime threshold to 40 hours is bipartisan, with a handful of Democratic lawmakers against it.

Opponents Thursday expressed concern the reduced overtime threshold will drive agriculture out of the state.

"It would be a shame — a real shame — to see our farmers and their small businesses take the exodus and take that route like so many other former New Yorkers," said state Assemblyman Jake Ashby, a Republican from Castleton.

Lawmakers expect the decision won't be announced until after the general election on Nov. 8.

"I don't think you'll see a decision from the governor until after Election Day, which I think is a shame," said Assemblyman Chris Tague, a Republican from Schoharie and former dairy farmer. "If she's gonna double down on this, then do it now and let the people make a decision on Election Day — especially our farmers — whether she did the right thing or not."

The group vowed to continue to fight the likely inevitable decision.

Leaders with the state Farm Bureau said last month Gov. Kathy Hochul intends to accept the Farm Wage Board's expected recommendation to reduce the overtime threshold for farm workers to 40 hours over the next decade.

The governor's office did not return a request for comment Thursday.

"Gov. Hochul remains committed to a fair and reasonable approach on this issue, which is why she launched a statewide listening tour to hear directly from farmers and farm workers about the challenges they face," according to the Labor Department's Farm Wage Board fact sheet.

Tague stressed he will fight for legislation to expand meat and dairy processors across New York and to increase milk choice, or milk produced in the state, for public school students.

Tague sponsors legislation to absolve the Farm Wage Board, but Tuesday's meeting is expected to be the last time the board will convene. Legislation that created the board was specific its purpose was to evaluate and make recommendations to reduce the state's overtime threshold for farm workers to 40 hours. The Wage Board cannot consider any other decisions, according to the Labor Department.

New farm workforce credits included in the latest state budget, and a recent report from the state Comptroller's Office indicate the state is moving to a 40-hour overtime threshold for farm laborers.

The Farm Workforce Retention credit doubled to $1,200 in the budget through 2025.

If the overtime threshold is reduced, a new Farm Employer Overtime Credit will be equal to 118% of the eligible overtime hours worked, providing a dollar-for-dollar tax credit for every penny spent on overtime pay if the state threshold is lowered. Eligible farmers can receive an advancement on the tax credit for the first six months of the year to help with faster reimbursement.