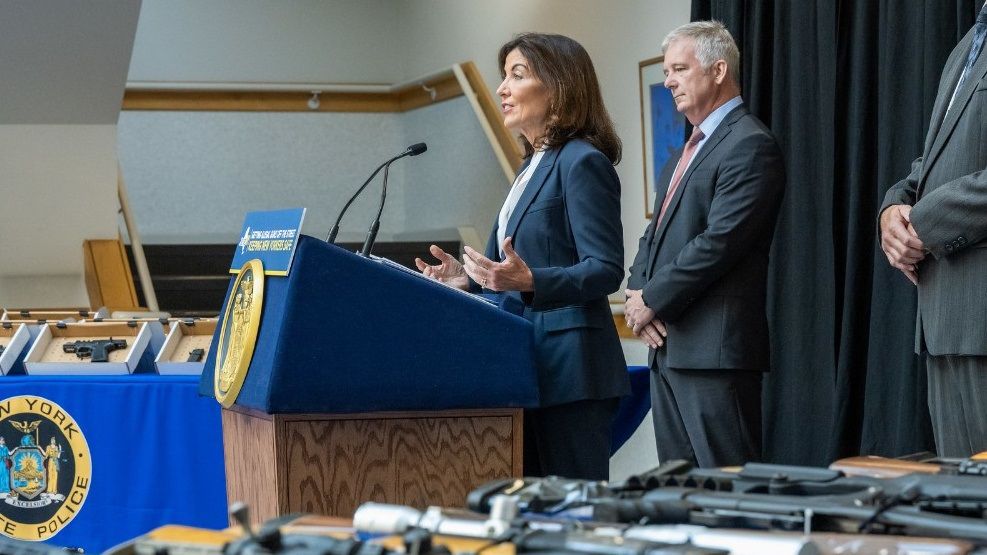 New York State Police have increased their seizure of illegal firearms across the state, taking almost 800 privately made firearms (PMF), or ghost guns, and assault rifles this year in an effort to decrease gun violence.

Hundreds of the illegal firearms police have confiscated in 2022 were displayed Thursday at the state police forensic lab in Albany.

Standing beside them, Gov. Kathy Hochul said the state is making progress in getting the firearms off the streets, as most gun crimes are committed using an illegal weapon.

Illegal firearms are often taken across state lines from Pennsylvania and transported statewide along Interstate 81 toward Syracuse, over to Rochester and down through the Bronx and to Brooklyn.

State police have 20 open investigations into illegal gun trafficking across the state with a focus on the manufacturers making illicit gun parts.

"We are fully committed to slowing the flow of illegal guns into our state through the commitment of our own resources and collaboration with law enforcement partners at all levels," State Police Superintendent Kevin Bruen said.

Law enforcement seized illegal firearms before the state crackdown on weapon trafficking, but resources were more focused on narcotics amid the opioid epidemic, Bruen said.

State police GTIU started its first investigation into a gun-trafficking ring operating in multiple regions of the state in December. The case led to the seizure of 30 guns, including six assault rifles, seven high-capacity magazines, 12 ghost gun pistols and assorted PMF parts, according to the governor's office.

State police have seized 795 guns to date this year ⁠—  an increase of 104% compared to this time last year, when they had confiscated 389 weapons. All law enforcement agencies in New York have reported 3,166 gun seizures to date in 2022 compared to 2,181 during the same period last year.

"These are guns that are no longer in the hands of violent criminals who would use them to perpetrate a drug trade or their gang warfare against each other or whatever purpose they had," Hochul said. "They can't do that now because those guns are right here and not on the streets of New York."

The latest state budget included $227 million for initiatives to decrease gun violence, including $18 million for local law enforcement gun violence prevention and $3 million for the Office of Gun Violence Prevention.