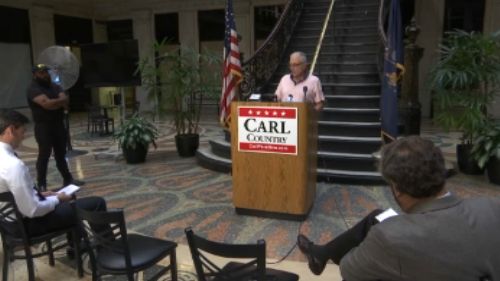 Paladino said he wouldn't appear on camera every time he gets a call, but if things are planned ahead he is open.

"I'm happy to answer any questions at any time,” he said. “I have nothing to hide. My life is sort of an open book. My career has been that way. I'm going to win this thing. I'm going to win it by quite a margin because the people believe in me and they know me.”

However, Paladino said he would not debate Nick Langworthy because people already know him. He took the opportunity during the availability to criticize the current NYGOP chair.

Paladino called on Langworthy to denounce any outside money being spent on the race by Washington D.C. PACs. He also preemptively called into question a poll he expected to release arguing two of his campaign's internal polls show him strongly in the lead.

Paladino said his campaign has more than $1 million on hand. Earlier in the day, he announced a $200,000 ad buy in a press release.

Both candidates have attempted to connect themselves to Trump in the largely conservative Republican new NY-23.

"He and his staff have told us that they're not doing endorsements," Paladino said. "It's very tricky. In this case, you've got the New York state Republican chair for the entire state running against me, so the Trump administration doesn't want to dig a hole to absolutely bury him, but obviously, the president has told me personally to go out and win."

Finally, he addressed a missed deadline to file his personal income disclosure. He said his people are working on it and it's a complicated document for him but the House has granted him an extension.