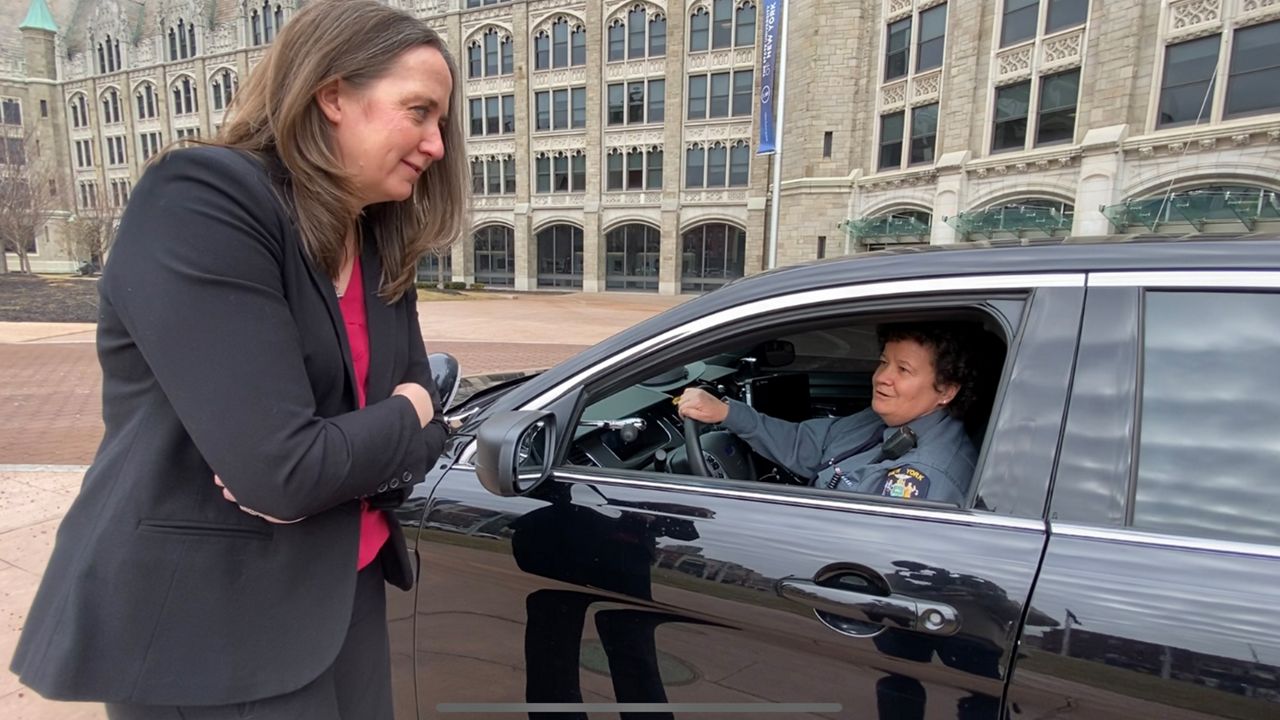 Members of the Police Benevolent Association of New York State say it's losing female members as they're passed up when seeking promotions, and are calling for better implementation of the state's effort to increase the number of women in law enforcement.

In May, Gov. Kathy Hochul announced the state would adopt a national initiative to increase the number of women in state law enforcement, including environmental conservation officers, state park and university police that make up the PBA.

The governor asked State Police and other police departments to commit to reaching 30% of women in police recruit classes by 2030 by signing the 30x30 Pledge.

But change won't be that simple.

James McCartney, president of the Police Benevolent Association of New York State, says Buffalo State recently hired a man from the West Coast with no ties to university policing, overlooking a woman who served as campus interim chief and had 20 years of department experience.

"Right there just tells her there’s a glass ceiling and she’s not going any higher, anymore," he said Monday.

Law enforcement and other state officials have celebrated the effort, but want action over taking a pledge, which they say will do little to diversify law enforcement.

"Diversity is what helps departments run smoothly as far as helping the public," said Caitlin Clark, a PBA member who works at SUNY Morrisville. "​The more you have of different thought processes, the different experiences, the better that they can serve. So I do think that that is a great initiative, but there's just work that would need to be done to do it."

McCartney says another female officer recently left SUNY Plattsburgh to become a state trooper last month after a senior member of campus police made a job announcement for the chief's position, but only allowed former chiefs or deputy chiefs to apply, excluding lieutenants and investigators.

"At SUNY Plattsburgh, no other applicants applied for the chief position except for the current chief," according to a SUNY spokesperson. "At Buffalo State, an outside search firm assisted and the position was awarded to Stephen Mayoral who is a Hispanic male and has more than 22 years of experience in law enforcement."

McCartney says the actions are inexcusable, and were done to maintain the male-dominated status quo at the top.

"There's no other reason," he said. "It's just kind of mind-blowing when you have dedicated female officers working for your department."

SUNY's University Police Commissioner Mary Ritayik signed the pledge on behalf of SUNY officers when the 30x30 initiative was announced. The commissioner continues to speak with campus police chiefs about the initiative.

"At the same time, SUNY has joined the state’s recruiting efforts to encourage more New Yorkers from diverse backgrounds to seek a career in law enforcement," SUNY spokeswoman Holly Liapis said in a statement. "The percentage of women in SUNY’s police department is higher than national and state averages at 22%. We look forward to meeting the goals of the initiative of 30% by 2030.”

A lack of maternity leave for PBA members also contributes to lower numbers of women who stay or advance through the ranks. The union decided not to join the state's paid family leave benefit because it would cost all members, who are more than 90% men, significant more money. Members cannot individually opt into the program.

Clark, 33, took extended leave when she had her two children, but worked until the day she gave birth. She said the benefit would help women enter and stay in state law enforcement agencies.

"That's an avenue we could visit and make it so women don't have to choose between a law enforcement career or their families," Clark said.

The union's contract expires March 31, and will be negotiating with Gov. Hochul's office during budget talks in the spring. Paid Family Leave may be revisited during contract discussions, McCartney said.

The governor’s office did not answer questions about the recent hiring incidents at Buffalo State and SUNY Plattsburgh, and did not give details about how the state will make the initiative successful.

A bill to reform the PBA's retirement system to 20 years from 25, and bring parity with other state law enforcement, will be headed to Hochul's desk by the end of the year.

Changing the environmental, park and university police retirement system to 20 years will cost about $7.1 million per year, but will further help retain staff, and not lose them to other law enforcement agencies.

​"It's on their radar," McCartney said. "They asked for more statistics, we gave them more statistics. So she is seriously considering it. That's good news for us."