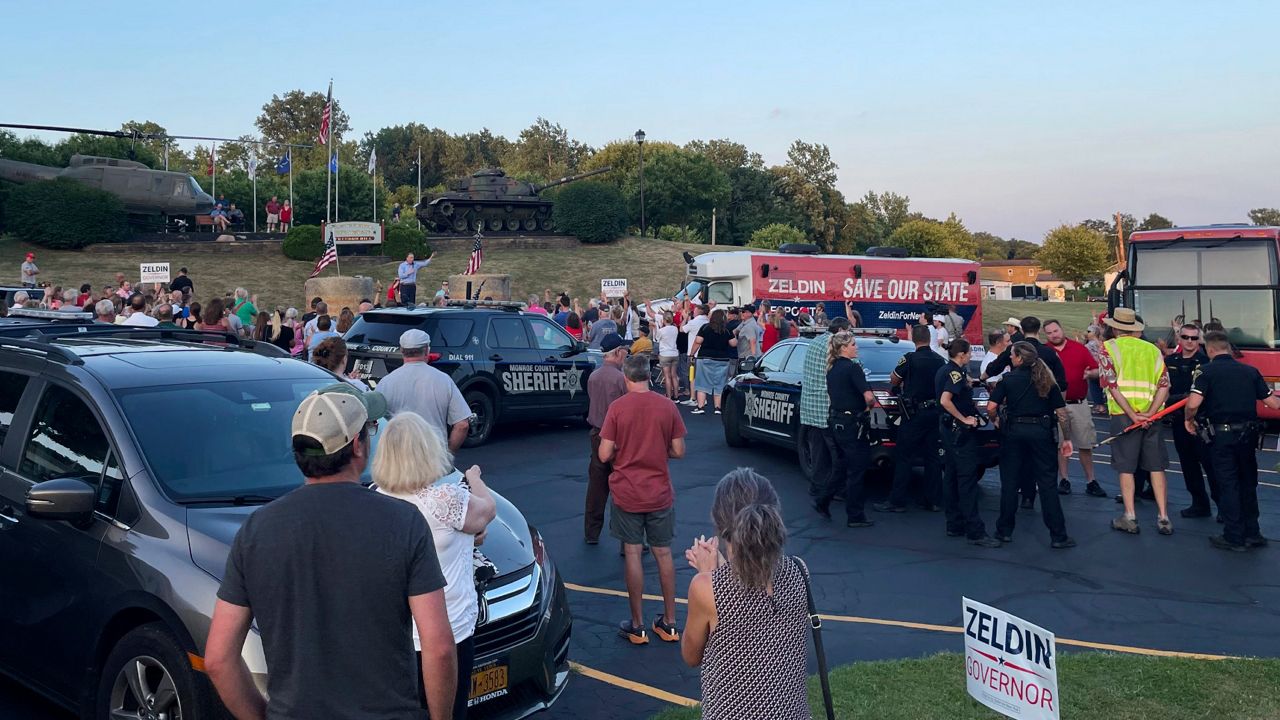 In this photo provided by Ian Winner, U.S. Rep. Lee Zeldin, the Republican candidate for New York governor, speaks after being assaulted by a man who apparently tried to stab him Thursday, July 21, 2022, in Fairport, N.Y. Zeldin escaped serious injury. (Ian Winner via AP)

Rep. Lee Zeldin has been trying to make his scuffle with an attacker last week part of his case for undoing state bail reform laws.

But the Republican nominee for governor is left clarifying some details in the incident’s aftermath. Why didn’t the prosecutor who once served as his gubernatorial campaign co-chair level a bail-eligible charge?

“From my understanding, the Monroe County district attorney was not — Sandra Doorley was not involved at all,” Zeldin said, adding, “She wasn’t involved in that charging decision.”

Why condemn district attorneys like Manhattan’s Alvin Bragg — who Zeldin has repeatedly said he’d remove if elected governor — and not allies like Doorley?

“Well, what I say about cashless bail release is that it’s the fault of the state,” he responded.

Asked why Doorley was leading his campaign if the district attorneys association advises against such political activity, Zeldin told reporters she had stepped back “and told me that she wouldn’t be able to be one of our state campaign co-chairs, even though she would love to be.”

Zeldin also said Doorley is recusing herself from the case.

The prosecutor was at the Zeldin event Thursday in Perinton, outside Rochester, where a man authorities identified as David Jakubonis was seen lunging at Zeldin wielding a key chain with two pointed tips.

Jakubonis was charged at the state level with second-degree attempted assault and released.

But he was then charged federally on Saturday with assaulting a member of Congress using a dangerous weapon and is being held.

Zeldin and the Republican slate have a tough-on-crime platform, criticizing Gov. Hochul and Democrats as not doing enough for public safety.

“It is imperative that we repeal cashless bail in the state,” he said.

On Monday, Hochul condemned the attack on Zeldin, “I will first of all say that I condemn violence wherever it happens, but it has no place in our political discourse.”

She said she’s working to get guns off the streets and otherwise make New Yorkers safer, but hedged: “Making decisions regarding district attorneys is not my call.”