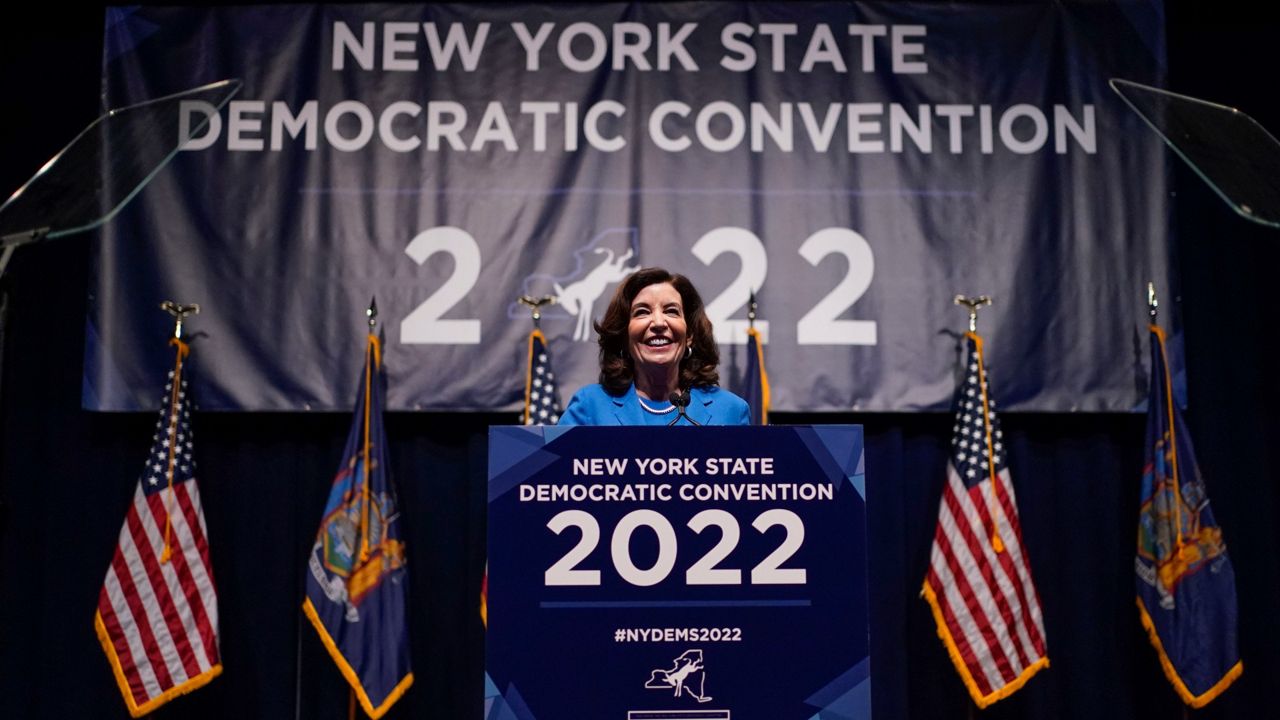 For state Democrats, it was history making when Kathy Hochul took over as governor last August after Andrew Cuomo resigned over a sexual harassment scandal.

And history was made again this week, when Hochul became the official designee for governor by the state’s Democratic Party.

“I thank each and every one of you, the heart and soul of the Democratic Party, for giving me the opportunity to serve as the very first female nominee for governor,” Hochul said.

Hochul received 85% of the weighted vote from members of the Democratic State Committee, winning the nomination overwhelmingly, and shutting out New York City Public Advocate Jumaane Williams, who was hoping to get at least 25% of the vote to get an automatic spot on the primary ballot for June.

BREAKINg: ⁦@KathyHochul⁩ wins the nomination for Governor with 85% of the vote at the Democratic State Convention. ⁦@JumaaneWilliams⁩ fails to garner 25% for a spot on the ballot as her challenger pic.twitter.com/t4W7OjZHTE

Williams plans to gather signatures now to get onto the ballot, and Hochul’s other opponent, Congressman Tom Suozzi, did not even submit his name for the nomination, and will also attempt to petition his way on.

“As governor, and as the leader of this party, I am declaring that a whole new day has dawned, one that is grounded in the belief that the power and the organization must rise from the bottom up!” Hochul said.

At one point, protesters disrupted Hochul’s acceptance speech, demanding that she support pro-tenant legislation in Albany, and more money for workers who missed out on federal pandemic relief, known as “Excluded Workers.”

Hochul was introduced by former secretary of state and failed presidential candidate Hillary Clinton, who also served as U.S. senator for New York for eight years.

Clinton delivered some of her strongest remarks yet about the threat to democracy that was on display during the Jan. 6 attack on the U.S. Capitol last year.

“When the Republican Party officially embraces violent insurrection and refers to it as legitimate political discourse, when storming the Capitol, assaulting police officers, trying to overturn an election, are being normalized, we are in uncharted territory,” Clinton said.

While some Democratic operatives fear a potential red wave in November that could mean big losses for the party, Hochul urged party unity and message discipline.

“What is the greatest threat to the Republican Party? What is their biggest nightmare? A United Democratic Party. That’s what they are worried about. Even on issues we don’t agree, when it comes to election time, we cannot allow ourselves to be divided,” Hochul said.

The process for candidates to petition their way into the ballot begins March 1. That will determine whether Hochul faces any opposition in the June primary. She will definitely have an opponent in the November general election.