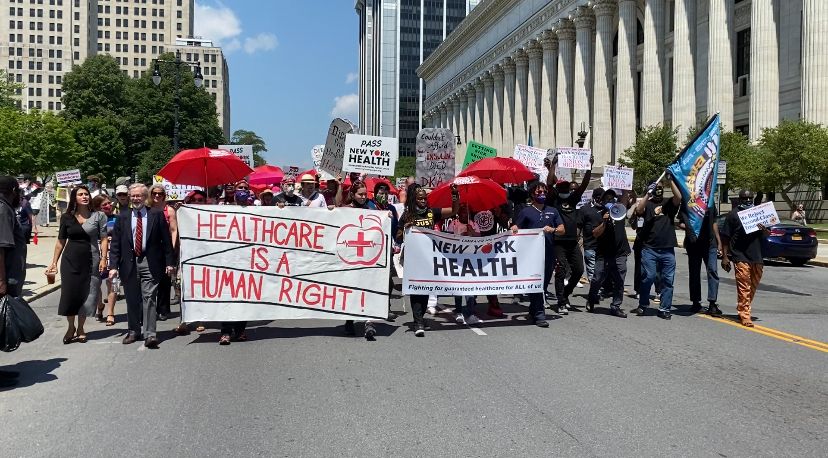 New York Health Act has the votes; but will it pass?

Advocates and lawmakers led a march to the New York State Capitol in the steaming 90-degree heat on Monday, demanding the passage of the New York Health Act before the end of the legislative year in just a few days.

The New York Health Act, which would provide universal health coverage for every New Yorker, has been on the cusp of passing for years, but has never quite crossed the finish line.

Until 2019, Republicans unsurprisingly blocked the bill, despite it passing overwhelmingly in the Democrat-controlled Assembly five times.

Yet after the Democrats took control of the Senate, the bill stalled in both houses.

Now for the first time, there are enough Democratic co-sponsors on the bill to pass both the Senate and Assembly, but the bill still has not been scheduled for a vote.

Ursula Rozum, co-director for the campaign for New York Health, says Democrats need to do the right thing.

In light of the COVID-19 pandemic, supporters of the bill say that equal access to health care could have saved lives.

Advocates demonstrated outside the State Capitol by holding a “die-in” — lying on the hot pavement in the street. The rally was led by select lawmakers and even actress and former gubernatorial candidate Cynthia Nixon.

“This is the time to put up or shut up,” Assembly Health Chair Richard Gottfried said.

“This is something that our country is long overdue on,” Nixon said. “If you look at so many other wealthy countries across the world, they've had this for decades. And New York now finally has a majority in the Senate and a majority in the Assembly, there is no reason this is not being brought to the floor.”

While the New York Health Act would provide universal insurance coverage with no copays, deductibles or premiums, leading to lower health plan and provider administrative costs, there is a caveat.

The program would still most likely need at least $139 billion in new tax revenue, according to a RAND Corporation study, which means potentially higher taxes.

“This would blow up the whole system and build a new one from scratch that would be operated by the state government and based entirely on taxes,” Bill Hammond, a health care policy expert from the Empire Center explains. “So it would require, undoubtedly, the largest tax increase in the history of this state or any other state.”

Beyond that, Hammond says that this program would dominate budget negotiations every year.

The group, Realities of Single Payer, sent a statement in response to the rally saying,

“The New York Health Act (“NYHA”) would demolish the current system and immediately destabilize the state’s health care landscape. It would ban any form of private insurance, which eliminates all options and choice, forcing all 20 million New Yorkers into a new, untested, one-size-fits-all Albany-run health system. It would also eliminate a staggering 160,000 jobs and raise state taxes by $250 billion per year. Doctors and hospitals would see their funding decimated. Seniors would lose their Medicare coverage. Union members would lose the benefits they have earned.”