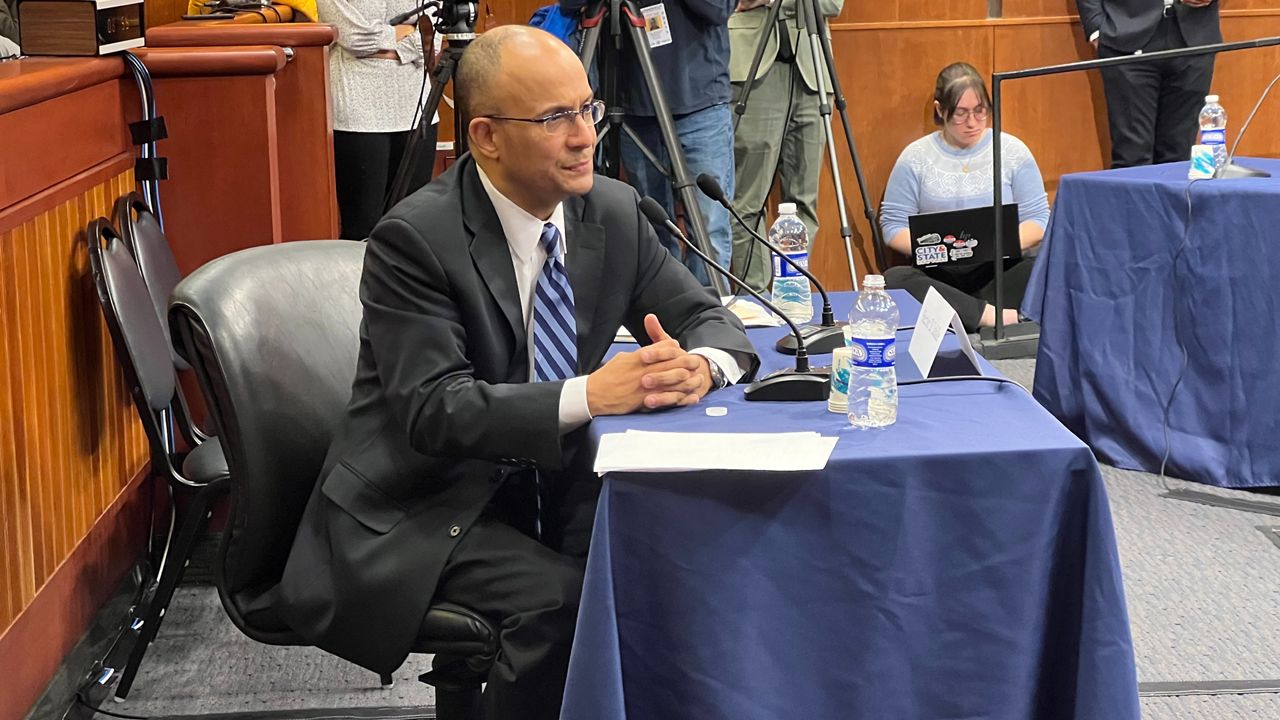 Justice Hector LaSalle appears at a hearing of the state Senate Judiciary Committee Wednesday in Albany where his nomination to be the state's chief judge was voted down. (NY1/Richard Agostinoni)

Gov. Kathy Hochul's choice to lead New York's judiciary and top court was voted down by a panel of state lawmakers on Wednesday following a five-hour hearing, throwing into chaos a confirmation process for the state's chief judge.

The unprecedented development could lead to a court challenge by the Hochul administration, which has raised doubts over whether the Judiciary Committee in the state Senate can have the final word, or if the nomination could be advanced to the full floor.

In a statement, Hochul called the hearing thorough, but potentially unfair. She argued the state Constitution requires a full vote by the Senate, but stopped short of announcing an intention to sue.

"While this was a thorough hearing, it was not a fair one, because the outcome was predetermined," Hochul said. "Several senators stated how they were going to vote before the hearing even began - including those who were recently given seats on the newly expanded Judiciary Committee. While the Committee plays a role, we believe the Constitution requires action by the full Senate."

The rejection is a victory for progressive advocates who had staunchly opposed LaSalle's nomination, calling him too conservative to lead New York's Court of Appeals.

Republicans criticized Democrats early on for vowing to vote against the nomination.

"In contrast, the radical majority members of the Judiciary Committee put their far-left politics ahead of their obligation to the people of New York, effectively blocking Justice LaSalle from becoming the first Latino Chief Judge of the Court of Appeals," Senate Minority Leader Robert Ortt said in a statement.

Democrats in the Senate have called for changing the trajectory of the top court in New York, arguing issues like criminal justice and workers' rights have veered too far to the right in recent years at the Court of Appeals.

“We had the hearing we said we would always provide," Senate Majority Leader Andrea Stewart-Cousins told reporters after the hearing. "The committee has spoken. The nomination was lost, and I’m hoping we can move forward."

Stewart-Cousins, along with Senate Judiciary Committee Chairman Brad Hoylman-Sigal, confirmed a full vote will not be held.

Senate Democrats have not retained counsel in the event Hochul files a lawsuit, Stewart-Cousins said, who said she had a "cordial" meeting with Hochul a day earlier about the hearing.

"Justice Hector LaSalle’s record made clear to hundreds of labor unions, reproductive rights organizations, civil rights groups, community-based organizations, state senators, and everyday New Yorkers that he is the wrong choice for our state," said Peter Martin, the director of judicial acccountability at the Center for Community Alternatives. "We thank the Senate for rejecting this nomination and we call on Gov. Hochul, as we have for months, to put forward a nominee for chief judge who will stand up for the rights of marginalized New Yorkers and lead the court New York deserves."

A judicial candidate nominated by a governor has never been rejected by lawmakers in the years since the process was changed more than 40 years ago.

The hearing centered around Hochul's nominee to lead the state court system began Wednesday morning, where lawmakers on the Judiciary Committee grilled LaSalle with at-times contentious questions over his record.

LaSalle is facing an unusual degree of opposition from members of Hochul's own party, who have pointed to rulings considered to be too conservative that LaSalle has backed during his career. His supporters, however, have argued progressive criminal justice reform advocates have taken those rulings out of a crucial context.

"This won't be a roast, but it won't be your Bar Mitzvah either," Senate Judiciary Committee Chairman Brad Hoylman-Sigal said in his opening remarks pledging a fair hearing.

Multiple Democrats in the state Senate have already pledged to vote against LaSalle's nomination in the wake of opposition from progressive organizations and some labor unions. Opposition has grown so quickly that LaSalle's nomination has been put in serious doubt, and would make him the first judicial nominee for the top court voted down since the process began more than 40 years ago.

Prior to the start of the hearing, opponents and supporters of LaSalle's confirmation held dueling rallies.

"Gov. Hochul has said she wants a nominee who could be 'tapped for the Supreme Court someday,' but Justice LaSalle has apparently written only six opinions under his own name in his decade-long tenure as an appellate judge," said Noah Rosenblum of NYU Law School and LaSalle critic. "Justice LaSalle is not the Chief Judge New York deserves.”

Opponents have contended the court has gone too far to the political right in recent years, and have sought judges who have not worked as prosecutors during their career. LaSalle is a former assistant district attorney in Suffolk County.

But supporters have questioned why LaSalle's resume is being questioned now as a Latino is poised to lead the court for the first time and when few Latinos have prominent roles in New York's state government.

"What's at stake is the merit system. What's at stake here is that there's a system that's fair, that if you do your job, if you fulfill your responsibilities to society, you have a reasonable expectations that you will be judged on the merits of your work," said Roberto Ramirez, a former state assemblyman and LaSalle supporter. "What has been done to Judge LaSalle is a travesty."