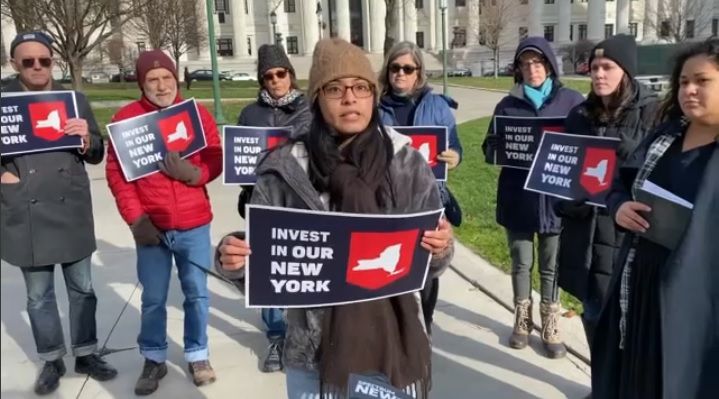 What progressive advocates want from Albany in 2023

As she enters her first full term, Gov. Kathy Hochul has signaled plans she will work to expand housing in New York to address a long-standing shortage and cost crunch throughout the state.

Advocates like Allie Dentinger of Housing Justice for All want to hold her to that promise.

"These are our neighbhors that are living on the streets, sleeping in their cars and what about the hundreds of thousands of people who are one pay check away from that," Dettinger said on Monday in Albany.

Dettinger was among the progressive advocates on Monday who held rallies throughout the state to urge state officials to do more in the coming legislative session to help low-income New Yorkers.

The push from the Invest In Our New York campaign is drawing in a range of organizations calling for measures meant to help immigrants, people struggling with housing and those who need access to public beneifts.

New York's budget has been flush with cash due to increased taxes on the rich, as well as federal aid. But advocates want to see more done next year.

With Democrats in firm control of all branches of government in Albany, advocates are pressing them to increase the minimum wage, expand child care and public education spending by $15.8 billion and provide a recurring fund to help workers who do not qualify for unemployment assistance, many of whom are undocumented.

And to fund it all, Michael Kink, of Strong Economy for All, called for taxes on the richest New Yorkers to once again be increased.

"All of these things will help regular people and we have the money to pay for it," Kink said. "New York has more concentrated wealth then anywhere else in the country."

Lawmakers in the last decade have backed higher tax rates on New York's rich in order to fund schools and health care spending. The result: Some very wealthy New Yorkers already paying the highest income tax rates in the country.

"New York state when you combine both the state rates and the rates in New York City has the highest top marginal tax rates on personal income," said Patrick Orecki, the director of state studies at the Citizens Budget Commission.

The state relies on a relatively small number of very wealthy people for much of its tax revenue. At the same time, New York's unemployment has struggled to regain its pre-pandemic footing and is not expected to for a number of years.

Despite the influx of cash, New York's unemployment rate remains higher than the rest of the country on average.

"The pandemic impacts are still playing out, how businesses and people decide where to live and locate their business is still uncertain right now and certainly going forward," Orecki said.