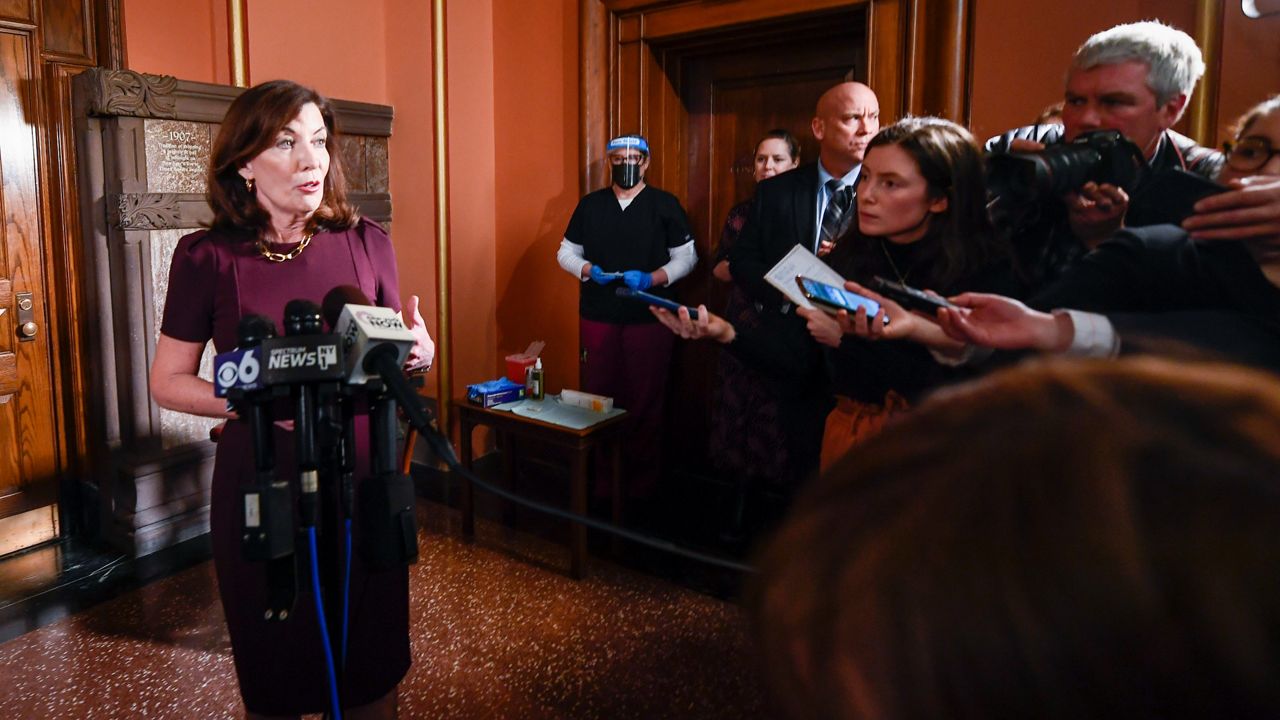 New York's $220 billion state budget is being put to bed just as the election year is beginning to pick up.

The spending plan agreed to by Gov. Kathy Hochul and state lawmakers seemingly has something for every voter — a headline that satisfies a key constituent concern.

Worried about crime, as polls have recently shown many voters in New York are? Hochul and lawmakers agreed to make changes to the state's bail law, expanding the situations in which cash bail would be required.

Concerned about the sustained high price of gas? Two gas taxes worth a combined 16 cents will be suspended for six months from June 1 to the end of the year.

Enjoyed an alcoholic beverage with your takeout order during the pandemic shutdown? That will be allowed now as well.

Buffalo Bills fan? Taxpayers will be footing the bill for their new stadium in Western New York.

The budget boosts child care funding by $5 billion over the next several years as well as $375 million for pre-Kindergarten so that more school districts can start programs. Nearly every aspect of life — from the drive to work, to kids at school, to affordable child care for middle-income and low-income families, to safety on the streets — has been affected.

Hochul in a news conference acknowledged the stresses on voters, from the pandemic to spiking inflation. She touted the tax breaks for gas and a property tax rebate in the budget.

"This budget will put more money back in peoples' pockets," Hochul said. "We want to make sure that was the outcome."

But not everyone was thrilled with the budget as agreed to. Hochul's opponents in the Democratic primary, as well as the GOP candidates vying to run for governor in November, blasted the budget as an inherently political document.

Hochul won her first budget amid an increasingly unsettled and uncertain political terrain. Voters have soured on the direction the state is headed in, and have little confidence in the economy, a Siena College poll last month found.

New York Republicans believe this is their best chance of recapturing the governor's office in a generation.

She's being criticized on the left, too, by New York City Public Advocate Jumaane Williams, a progressive candidate for governor.

"This is a budget that happens when we're flush with cash," Williams said standing outside the governor's office before Hochul spoke. "Imagine what will happen when the federal aid runs out."

And she's being criticized even from the center by another Democratic rival, Tom Suozzi, a Long Island congressman who has called for a tougher approach on crime and a 10% income tax cut.

"Instead of using this opportunity to lower taxes, reduce crime and make New York more affordable, Kathy Hochul showed her inexperience by botching the budget process and saddling New Yorkers with billions more in spending, including the biggest tax give away in NFL history to build a new Bills stadium."

Hochul stepped into the job last August following the resignation of Andrew Cuomo amid allegations of sexual harassment and misconduct. He has pointedly not ruled out running for governor again, potentially on an independent line.

Hochul has vowed to steady the ship in New York in an era of instability. The development of the spending plan has been criticized by good-government organizations for its overly secretive process and will be approved a week after its due — hallmarks of a long tradition in Albany budget making.

But the governor has insisted the actions of government and her administration are an obvious improvement.

"It has been a phenomenally collaborative process from day one. When I stood in this very room seven and a half months ago, I said we're going to do things differently," Hochul said, "and that is why you didn't see the games played out in the press, the one-upsmanship, the scoring points to get the upper hand, I wanted to make sure we did it in a way that people knew was respectful."

Was this year a challenge for New York officials? Senate Majority Leader Andrea Stewart-Cousins, a Democrat who first took office the same year Eliot Spitzer started his ill-fated time as governor, pointed to Spitzer's pledge that on day one "everything changes."

"It seems like everything's been changing since then," she said.