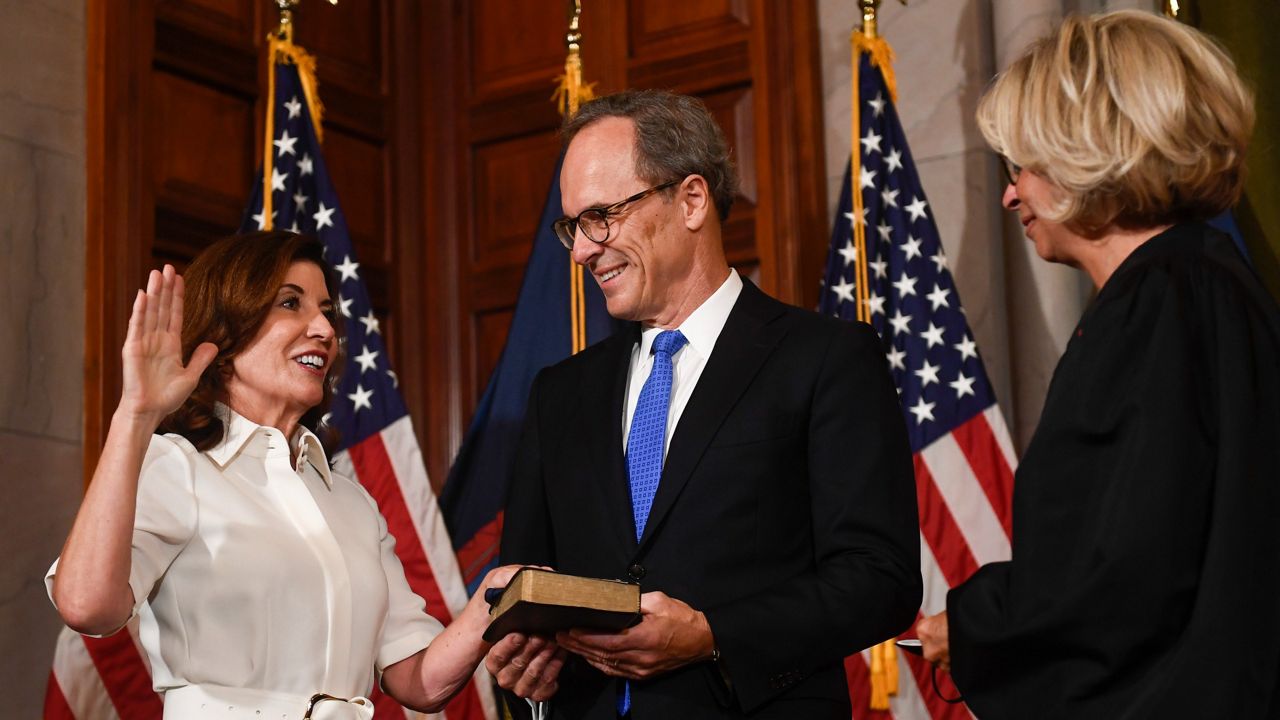 New Yorkers think Gov. Kathy Hochul can succeed on a variety of fronts. That confidence from voters, reflected in a Siena College poll released earlier Tuesday, is going to be key for Hochul as she navigates the shark tank that is New York politics heading into what could be yet another unpredictable election year.

Hochul has spent three weeks in office since taking over from the scandal-scarred Andrew Cuomo. In that time, she has steered through an extraordinary session of the Legislature to extend a moratorium on evictions for those facing financial hardships due to the COVID-19 pandemic. She's put in universal masking requirements in place for school buildings and has pushed vaccination requirements for education personnel as well as health care workers.

She had to manage her first natural disaster, when the remnants of a hurricane dumped enough rain on the New York City area to lead to catastrophic flooding, killing dozens and causing untold millions in property damage.

Through it all, she has strived for an overarching message: She's not Cuomo.

But unlike the former governor with a famous family name, Hochul still remains largely unknown to many New Yorkers. But Siena College pollster Steve Greenberg thinks that will change.

"I think there's a hopefulness about her and I think people are starting to learn who she is and when we go into the field in October and look at it, I think that 40% who don't know her will drop," Greenberg said.

Hochul is facing a variety of challenges, including to her efforts overseeing the ongoing COVID-19 pandemic. On Tuesday, a group of health care workers won a preliminary victory in federal court, blocking the state Department of Health from enforcing a vaccination requirement for those who claim a religious exemption.

"What we're seeing in other states around the country, that's really not the case in New York, except with a small minority of New Yorkers," Greenberg said.

Hochul plans to run for a full term next year. It will be a potentially contentious one for a new governor who has work to do with name recognition. Attorney General Letitia James would immediately be considered a leading challenger, though she has given no indication she would run. Rep. Tom Suozzi, a Long Island Democrat, would likely steal moderate suburban voters from her.

And New York City Public Advocate Jumaane Williams is a potential standard bearer for the progressive left in New York. The bonhomie between Hochul and Mayor de Blasio could evaporate if he decides to enter the race.

"That's got to give them some pause that among Democrats there's not this clamoring 'we need a different candidate,'" Greenberg said.

But how long will the honeymoon period for Hochul last? SUNY Albany adjunct professor Bruce Gyory says that depends on how Hochul responds to a crisis.

Hochul has a small window. The Democratic primary is scheduled for June.

"If between Columbus Day and Halloween the Hochul administration establishes a reputation for confidence, that's very important," Gyory said. "If then between Thanksgiving and Christmas, her job approval is approaching 60%, that would be very important."

It could be at once simple and complicated for the new governor: Do a good job, and voters will extend your contract.

"Hochul is in charge of her own fate," Gyory said. "If she handles the job well, she will be stronger both for a primary and for a general election."