Cuomo: "We Will Win the COVID War"

New York will be victorious in the "COVID war" as the pandemic continues to rage across the country, Gov. Andrew Cuomo pledged on Monday as he began to unspool his plans for 2021 this week in his State of the State address.

"COVID created low tide in America and the ugliness was exposed for all to see," Cuomo said. "New York is, of course, not immune to those currents."

The speech was delivered in the War Room of the Capitol, a room that carries symbolism for the governor, now in his third term.

Ten years ago, Cuomo was sworn in as governor for his first term in the same space. At the time, New York was facing a yawning budget gap amid an ongoing recession.

Now, Cuomo is pledging an economic rebuilding that balances public health and the fast distribution of a COVID-19 vaccine that has stumbled in the first four weeks, but is now ramping up across the state by opening the eligiblity to more people.

Typically, the address is a joint session of the Legislature. This time, lawmakers and the general public watched from a distance.

"The location is fitting because we are at war," Cuomo said, pointing to the ongoing COVID-19 pandemic.

It was one of four addresses Cuomo plans to deliver this week outlining his 2021 agenda. The address on Monday featured the broad strokes of Cuomo's plan for the new year: Building up the economy, stamping out the virus and identifying the racial, and economic divide that as been opened up like a fresh wound.

Now Cuomo's vision for the state in the new year comes amid widespread challenges: A pandemic that has crippled the state's economy and a polarizing political environment that shows little sign of ending.

New York's unemployment has soared in the last year as the pandemic closed businesses and forced others to cut back on workers while millions more have stayed home.

Schools have struggled to remain open during the crisis, with many turning to a combined model of distance learning and in-classroom instruction. 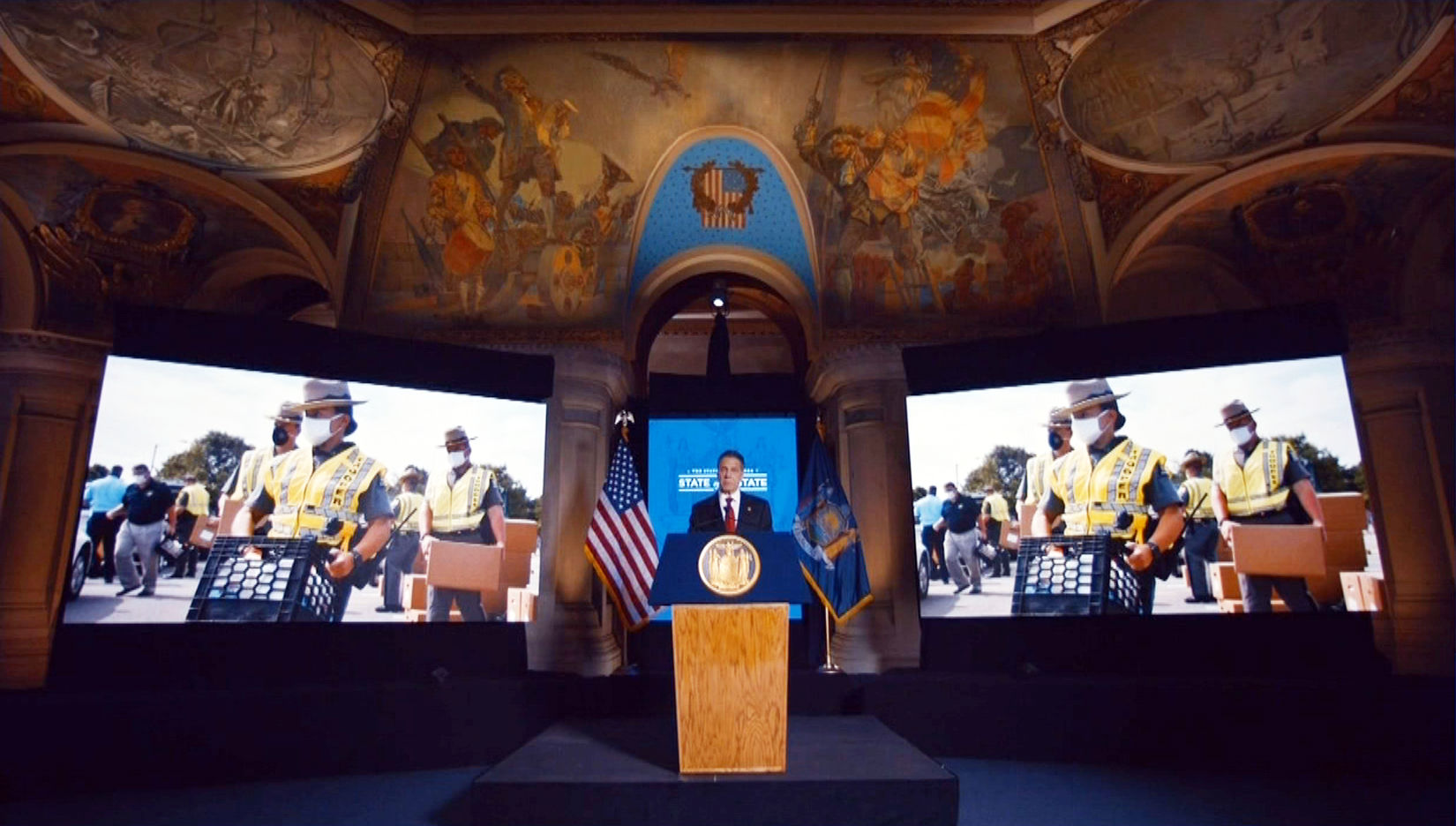 The pandemic has also laid bare racial inequalities compounded by the killings of George Floyd and Breonna Taylor, leading to calls for reforms for law enforcement organizations.

In New York, Cuomo is linking state aid to local governments and police departments developing their own changes by April 1, the state of the state's fiscal year.

Cuomo is seeking billions of dollars in aid from the federal government to make up for the lost revenue in the last 12 months.

He is seeking $15 billion from Congress and the chances of at least getting some of the funding have been buoyed in the last week as Democrats are due to gain narrow control of the U.S. Senate.

Local governments, too, have seen sharp reductions in their tax revenue, especially from the sales tax, and could see cuts to schools, health care, and other local services if aid is not approved.

Still, Cuomo is seeking new ways of generating cash for New York. He wants to legalize marijuana and mobile sports betting. The money that is expected to be raised from both moves will not close the budget gap and will not fully be realized for years to come.

Progressive groups, meanwhile, are pushing for steeper taxes on upper income earners. They, too, have been boosted by Democratic success in the 2020 election.

The question of whether taxes on the rich will be increased is nearly a foregone conclusion. Instead, the question is at what income level lawmakers and Cuomo will agree to hike taxes.

Democrats in the state Senate have gained a supermajority, emboldening the agenda of a new class of lawmakers who have signaled they are eager to challenge a governor who has led Albany for the last decade​.

Many of Cuomo's proposals won't cost the state much money, but are meant to protect those who have struggled financially. Cuomo is seeking further protections for residential and commercial tenants. He wants to make it easier to obtain an absentee ballot and have those ballots counted as they are returned to local elections officials.

The newer proposals in Cuomo's agenda first announced Monday include a Medical Supplies Act to ensure the state is better prepared for the next public health crisis.

Cuomo also wants the creation of a Public Health Corps of 1,000 fellows to provide support. And Cuomo called for the creation of a citizen public health training program by Cornell University so members of the pubic are "better prepared to help themselves and be ready to volunteer for their community during the next public health emergency."

But much of Cuomo's address on Monday dwelled on how to balance the needs of running an economy in the middle of a pandemic that has prevented mass gatherings and closed bars and restaurants.

"We must vaccinate all New Yorkers," Cuomo said. "We are expanding today. the federal vaccination supply must increase."

And Cuomo reserved his harshest criticism for the federal government that is expected to be far friendlier to his agenda with the swearing in of President-elect Joe Biden on Jan. 20 while calling on the new Congress to act. That includes direct aid for the state as well as an end to a $10,000 cap on state and local tax deductions.

"New York is suffering and New Yorkers are tired of being abused and New York demands Washington to stop causing the damage," Cuomo said.