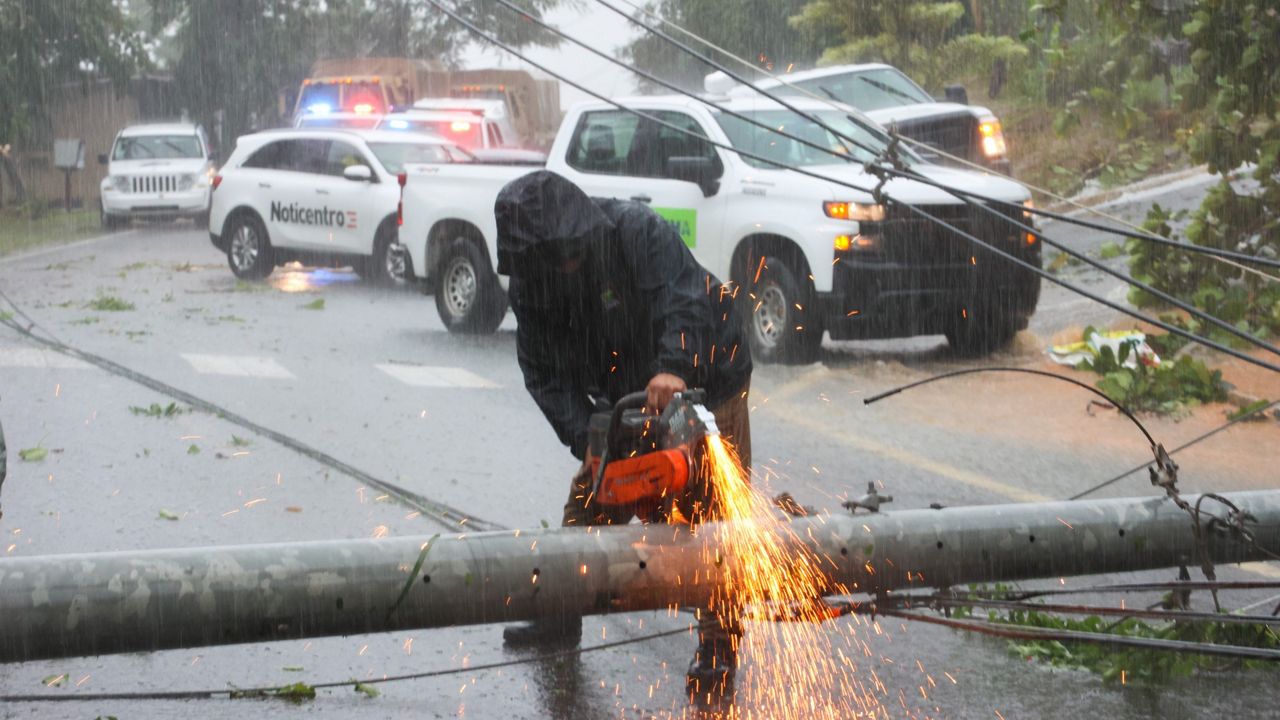 A worker cuts an electricity pole that was downed by Hurricane Fiona as it blocks a road in Cayey, Puerto Rico, Sunday, Sept. 18, 2022. (AP Photo/Stephanie Rojas)

As Hurricane Fiona continues to hit Puerto Rico, Gov. Kathy Hochul said Monday that New York state is preparing to send Spanish-speaking police officers, medical supplies and more to help the U.S. territory overcome the worst storm it has seen since Hurricane Maria decimated the island almost five years ago to the day.

“We have a long history, a long connection, with the people of Puerto Rico. I’m very proud to be the governor of a state with one of the largest Puerto Rican populations in our nation,” Hochul said at a news conference Monday morning in Manhattan. “They’ve really created the vibrant city we have here today, and that’s why we feel like when they’re in need, we have to be able to reach a hand out and offer assistance in any way possible.”

Fiona dropped up to 30 inches of rain on parts of the island’s southern region over the weekend, turning some streets into fast-moving rivers and causing an island-wide blackout, according to officials. Maximum sustained winds of 85 mph were recorded on Sunday night, according to the U.S. National Hurricane Center.

By Monday, power had been restored to approximately 100,000 residents, though over 1 million people lost electricity when the power grid went down, according to Hochul.

The National Weather Service said they expect catastrophic flooding over next three days, as well as landslides and mudslides — particularly in the southern regions of Puerto Rico.

Hochul said she spoke with Pedro Pierluisi, Puerto Rico’s governor, Sunday night and asked how New York could help. Pierluisi asked for a total of 200 Spanish-speaking police officers: one group of 100 to be activated this week, and then a second group of 100 to be rotated in two weeks later, according to officials.

Officials said New York state is working hand in hand with New Jersey to fulfill the request, and said if the state governments have trouble continuing to send fresh police officers to assist in the recovery, local police departments, like the NYPD, could be tapped to help the effort.

Hochul also said the state has reached out to not-for-profits and corporations to help coordinate the distribution of water, medical supplies and other essential items the island’s residents will need as they rebuild.

“What we’ve already done in a proactive way is reach out to corporate partners, good citizens in our not-for-profit industry to coordinate donations of water, sanitary supplies, baby formula, and I’m pleased to say, thus far, Delta, JetBlue, Coca-Cola have pledged their support,” Hochul said. “Literally as we speak, my team is on the phone right now, just lining up the resources so that we can get them down there with the support of our hometown airlines here.”