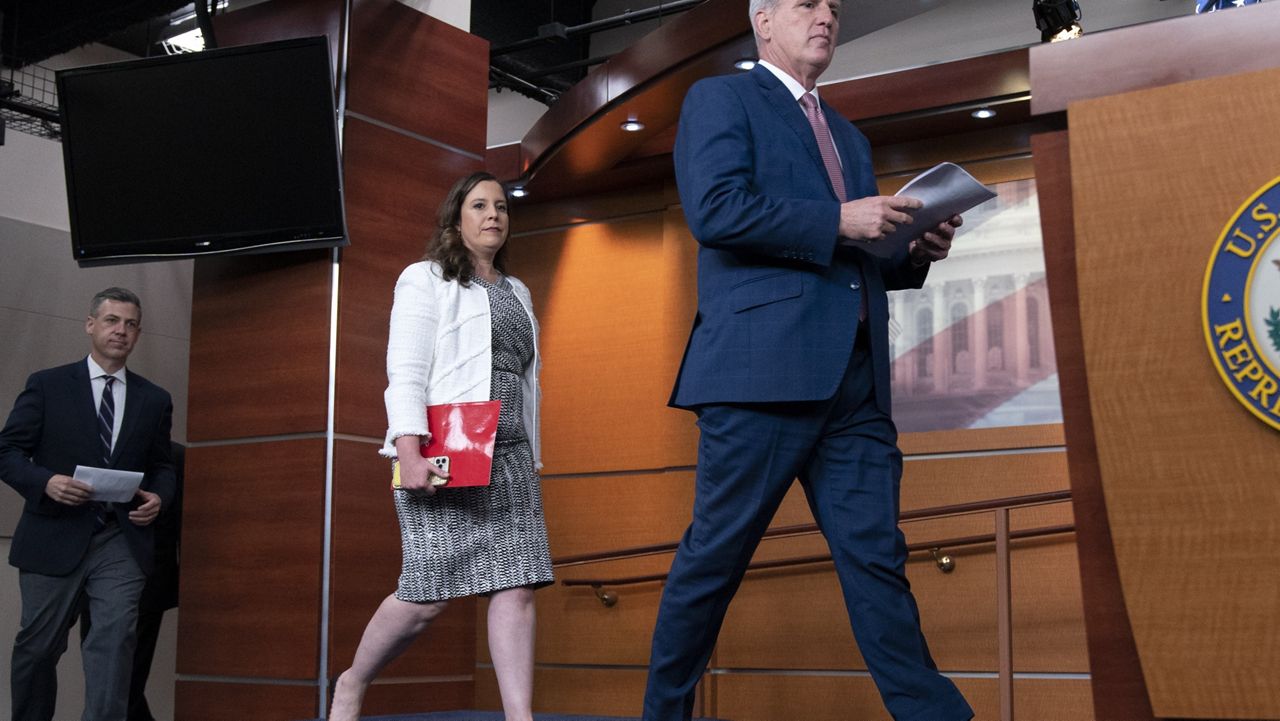 Path to Power: VP? Majority whip? After a rapid rise, what's next for Rep. Elise Stefanik?

New York Rep. Elise Stefanik has quickly climbed the Republican ranks in Washington, from freshman back-bencher to a top position in GOP leadership in less than eight years.

That rapid rise is fueling speculation about her political future, including talk of a potential bid for vice president one day.

Stefanik is currently on a glide path to re-election this fall in her North Country district, with political handicappers rating the district safely Republican.

Stefanik’s national profile has skyrocketed in the last three years. Her staunch defense of former President Donald Trump during his first impeachment put her in the spotlight and helped her win an internal election for House Republican Conference chair.

“She’s obviously a rising star,” said Rep. Glenn Grothman, a Republican from Wisconsin who joined Congress alongside Stefanik in 2015.

Speculation over Next Steps

If Republicans win control of the House in November, there’s plenty of speculation as to what Stefanik will do. Could she try to run for majority whip, which is the number three leadership post tasked with getting members to vote along with the party? Or perhaps could she look to chair a committee?

So far, she says, she is backing Minority Leader Kevin McCarthy of California for House speaker. She reportedly mulled a bid for New York governor this year, ultimately opting to seek re-election to Congress – a sign that she sees her future, at least for the time being, in Washington.

But on the question of what that future on Capitol Hill may look like, she is holding the cards close.

“I'm going to make that decision after we earn the right to be in the majority. I don't measure the drapes,” she told Spectrum News 1 in an interview in mid-August.

For now, she is throwing her weight around both in-state and nationally — with mixed success.

In New York, she made waves this year by endorsing Carl Paladino — known for his inflammatory comments — over the state’s Republican leader, Nick Langworthy, in a congressional primary in western New York.

Paladino lost, amounting to a self-inflicted wound for Stefanik.

She has had far better success in Washington, working to grow her own influence by getting more GOP women elected to Congress - an area where Republicans lag dramatically behind Democrats.

In 2018, she founded a political action committee called Elevate-PAC, endorsing and raising money for Republican women. So far this cycle, Stefanik has backed 48 candidates. Thirty of them are in races for open seats or to challenge an incumbent.

They represent a potential army of allies in debt to Stefanik if they win.

“It has been one of the most fulfilling parts of my job in Washington: Making that a goal, leading that effort, really sort of challenging the status quo,” she said.

Trump has labeled Stefanik a rising star and has headlined multiple fundraisers for her in the past year.

After backing her for GOP conference chair, could he intervene again in a future leadership race? In May, CNN reported that she is being talked about in Trump’s orbit as a possible vice president if he runs for the White House again.

Supporters back in her district embrace the prospect.

“I could see a Trump-Stefanik ticket, that wouldn't bother me at all. I think that would be good,” said Jack Tierney, a farmer from Malone, NY.

Asked if she would consider being vice president if Trump offered the position in 2024, Stefanik was coy.

“I would be honored to serve in the Trump administration,” she said. “I strongly support President Trump running. I think he will run. I will excitedly be a very strong supporter of his.”

Since taking on her new post, Stefanik has embraced the role of happy partisan warrior, offering sharp attacks on Democrats at her regular press conferences. She has also become a familiar face on Fox News and other conservative media outlets.

That does not go overlooked back home.

“We’re not used to turning on the news and seeing our member of Congress on there. I think people are proud of that,” said Jeff Graham, a former mayor of Watertown.

The local border patrol union leader in the North Country, Brandon Budlong, says unlike other members of Congress, Stefanik is easily accessible, and knowing that she is currently the third-ranking Republican in House leadership makes that accessibility all the more significant.

“We’re such a rural area, to have that kind of ear in DC, at that kind of a level, that’s just unheard of for anybody in upstate New York,” Budlong said.

Still, her critics wonder about her rise — and her loyalty to Trump.

“This is the kind of behavior that’s rewarded in today’s Republican Party, but at what cost?” said Rep. Seth Moulton, a Massachusetts Democrat.

He says he counted Stefanik among his friends when they both started out on Capitol Hill.

Fellow Republican Barbara Comstock, a former member of Congress and Trump critic who also arrived in the House in 2015, offered this assessment of Stefanik’s path to power in an essay in The New York Times: “There might be what appears as a short-term benefit, but situations like this often spectacularly fail … It won’t end well. Stories like this never do."