The poll of 1,451 New York adults found 67% either strongly or somewhat approve of the job Cuomo is doing handling the ongoing pandemic, while 28% do not.

Overall, Cuomo remains popular among New Yorkers, with 65% approving of the job he is doing as governor and 29% disapproving. 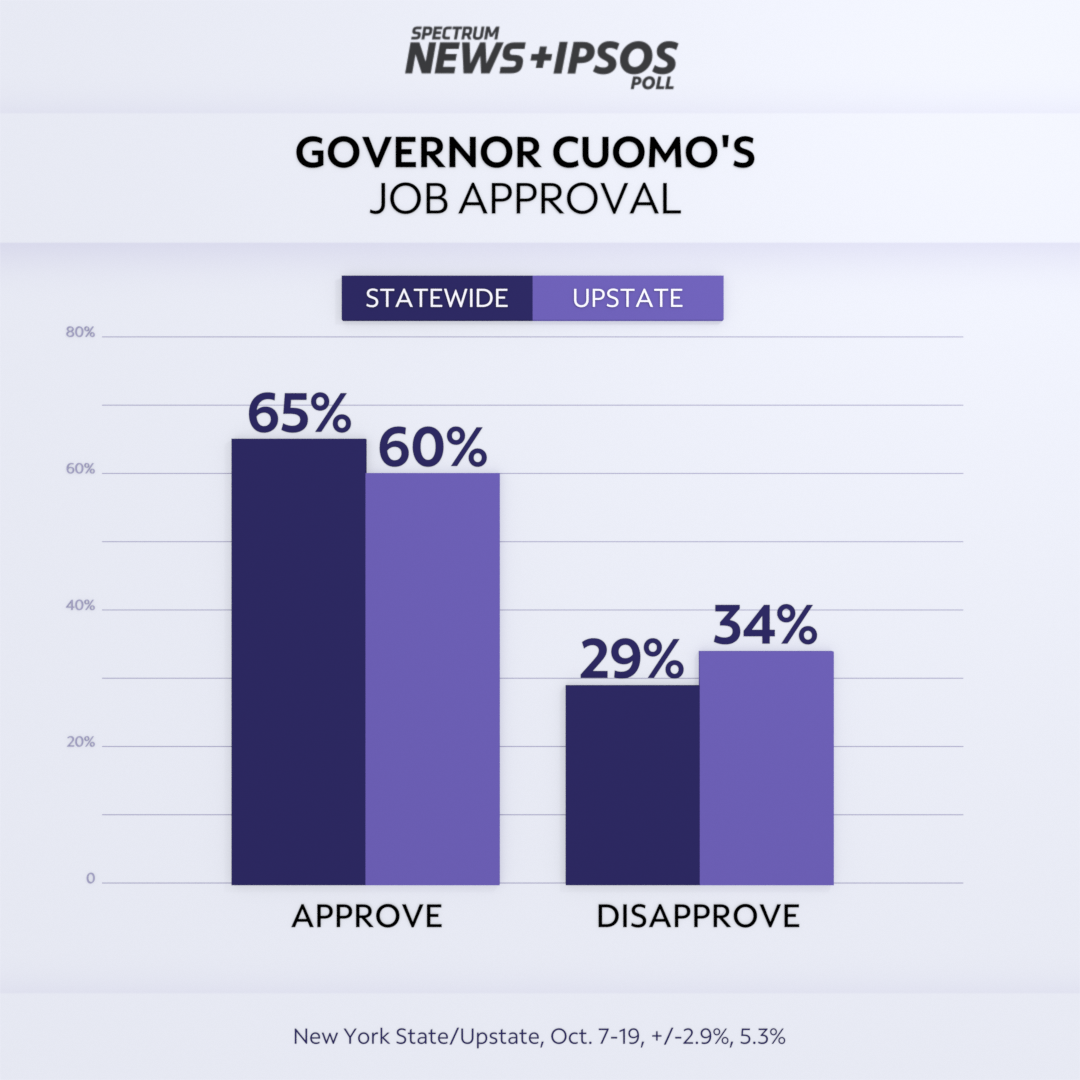 Crime is seen as a major problem as well, according to 27% of New Yorkers. Unemployment is also seen as a top issue by 27% of those surveyed. 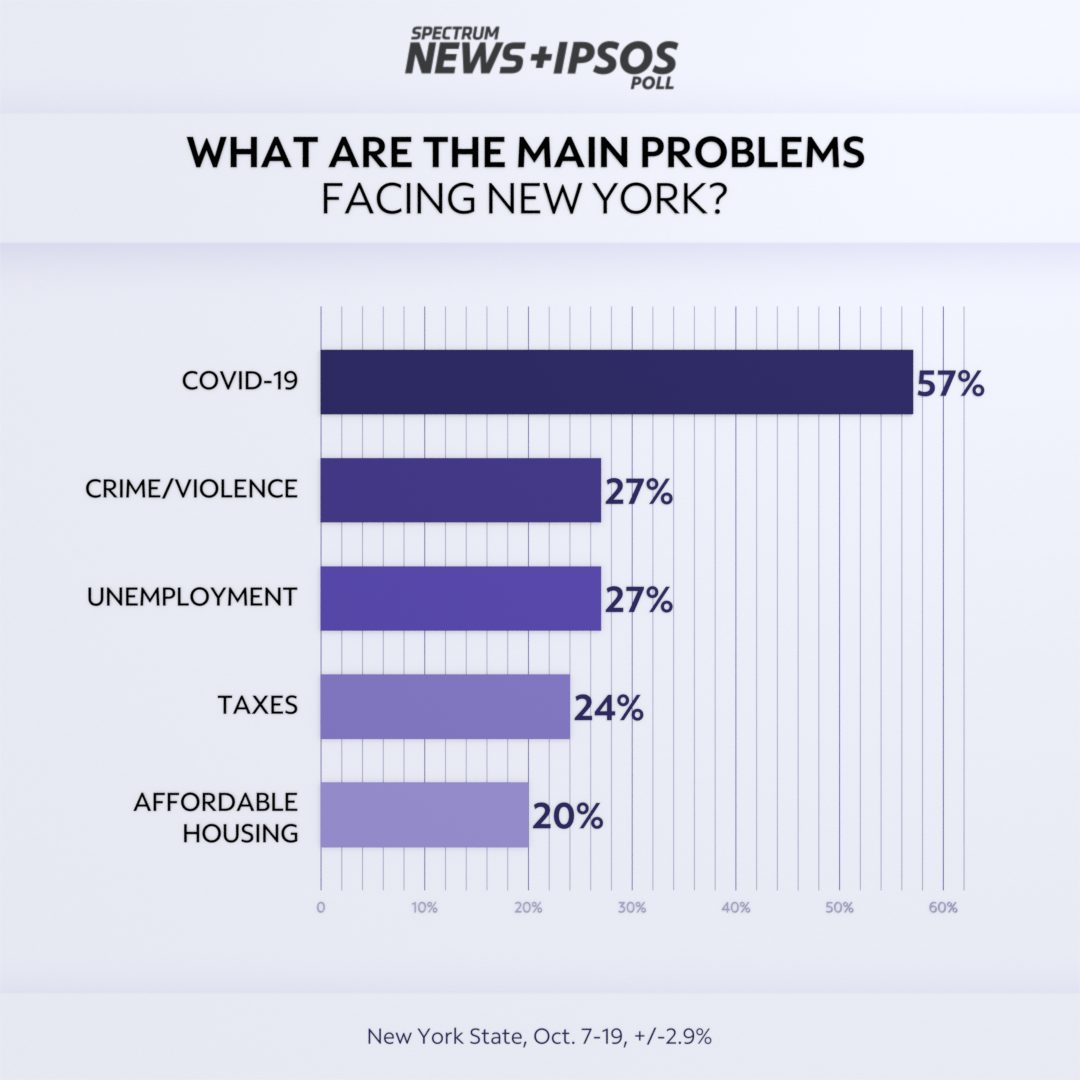 New York's unemployment rate rose sharply in the early weeks of the pandemic, with nearly one in five New Yorkers out of work at one point as schools and non-essential businesses closed to limit the spread of the virus.

The state's unemployment rate dropped below 10% last month for the first time since April.

Still, Cuomo also receives broad approval on issues like jobs and the economy: 56% of New Yorkers approve, 35% do not.

Cuomo receives similarly strong numbers on the plans for sending children back to school, the details of which were largely left up to individual school districts with a broad statewide framework for implementation on the local level.

The poll found 55% support the administration's school policy and 37% disapproved.

New Yorkers are  less supportive of the governor's nursing home policies during the pandemic: 50% approve of his handling of the congregant care facilities while 39% do not — the lowest approval on issues Cuomo receives in the poll. 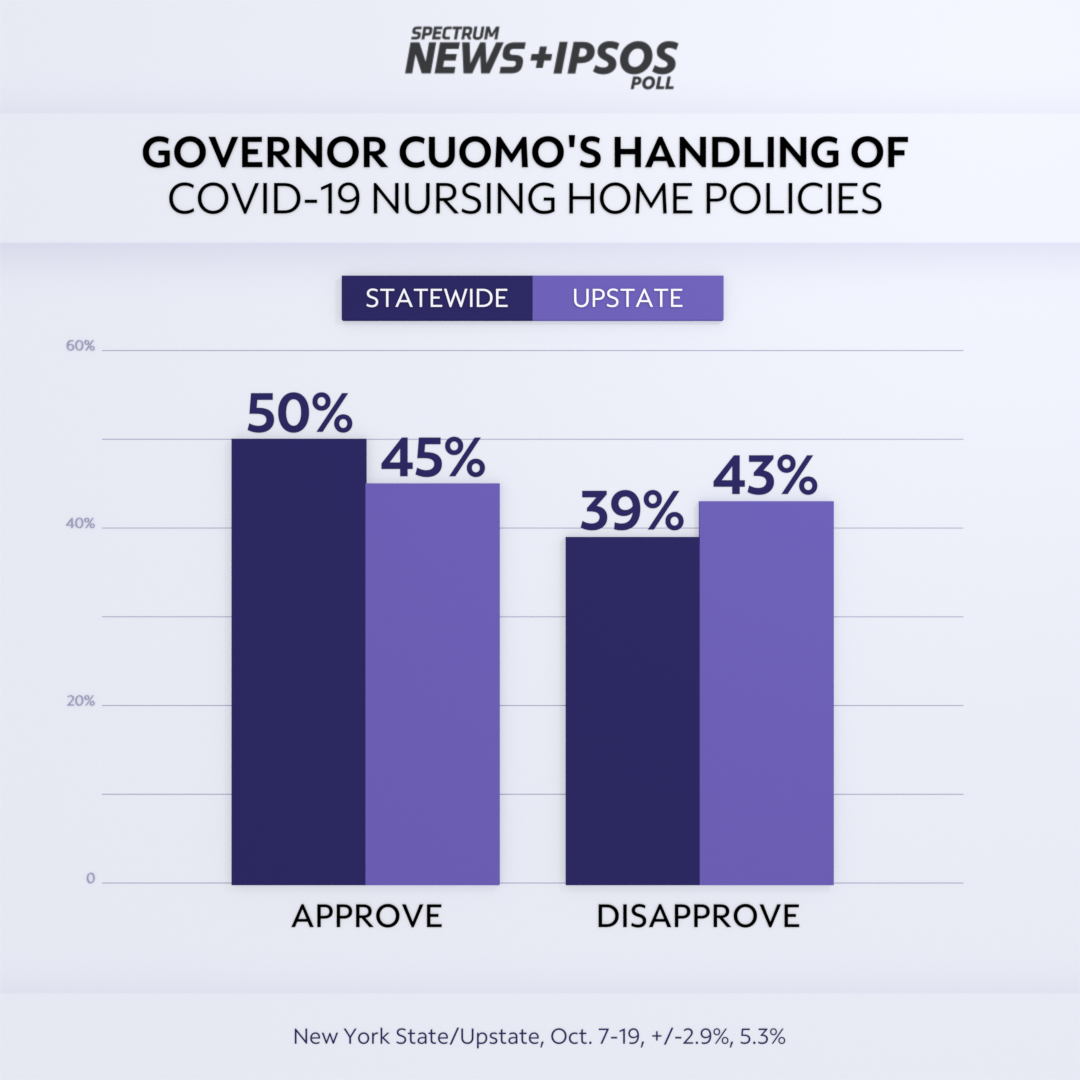 At least 6,500 nursing home residents have died of COVID-19 and critics have pointed to a March 25 order requiring nursing homes to not turn away COVID positive patients from hospitals. State health officials in a report released in July pointed to asymptomatic staff unknowingly carrying the virus into nursing homes.

Cuomo's prominence during the pandemic has given him a national platform, with his briefings on the details of the crisis seen across the country. Cuomo has traded barbs with President Donald Trump throughout the pandemic, sought federal help first for equipment like ventilators and masks, and later congressional aid to plug a looming budget gap.

"They agree with what I was doing in some ways before I did it," Cuomo said on Wednesday at a news conference when asked to react to the poll. "Close businesses, mass gatherings, yes, they supported it because they heard the facts and because they're smart."

Cuomo does not think the support gives him more leverage for future shutdowns, but is a reminder he and most New Yorkers have been aligned during the crisis.

"I don't think I have political capital," he said. "I think that in this process they came along with me as we worked it through together and I will tell you something, I am a student of history and government history, I think it was one of the most beautiful moments in democracy."

New York was among the first states to see the worst of the pandemic early on, with a shutdown order that began in March and started to ease in the late spring.

The summer offered a relative reprieve, as positive cases dropped to 1 percent out of tens of thousands of daily COVID tests and the death toll subsided. But cases are now increasing in parts of New York including Brooklyn and Queens as well as Orange, Rockland and Broome counties.

Cuomo has said this week the renewed focus will be on these "microclusters" of cases that could lead to closures of gathering areas in those spots. By stamping out the virus in those hot spots early, health officials want to avoid a broader statewide shutdown.

This month, Cuomo released a book on the pandemic, "American Crisis" which some criticized as a premature victory lap but the governor has said is a "halftime" assessment of the situation.

The poll was conducted from October 7 to October 19. It has a credibility interval of plus or minus 2.9 percentage points for all respondents.

Check the Spectrum News App for more coverage of the poll throughout the week.